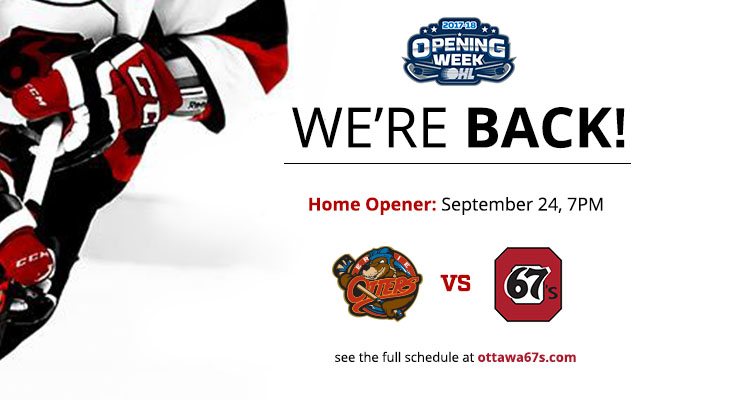 The Ottawa 67’s will host the Memorial Cup finalist Erie Otters on Sunday, September 24 at 7:00 p.m. at The Arena at TD Place in their home opener as celebrations commence in honour of their 50th Anniversary Season. Ottawa will open the 2017-18 calendar on September 21 when they visit the Barrie Colts.

“The home opener is a game that fans always have circled on their calendar and we’re excited to test ourselves against one of the top teams in the country, this will be a season of celebrations as we honour the past, present and future of this great hockey club. We look forward to celebrating our 50th anniversary with our fans who, in addition to our incredible alumni, are the cornerstone of the success of our hockey club.” – Says 67’s Governor Jeff Hunt

To celebrate the team’s 50th Anniversary Season, the 67’s are planning several special game nights. Details will be announced leading up training camp.

The complete 2017 OHL schedule will be released on Tuesday.