67’s Down Kingston in Home Opener 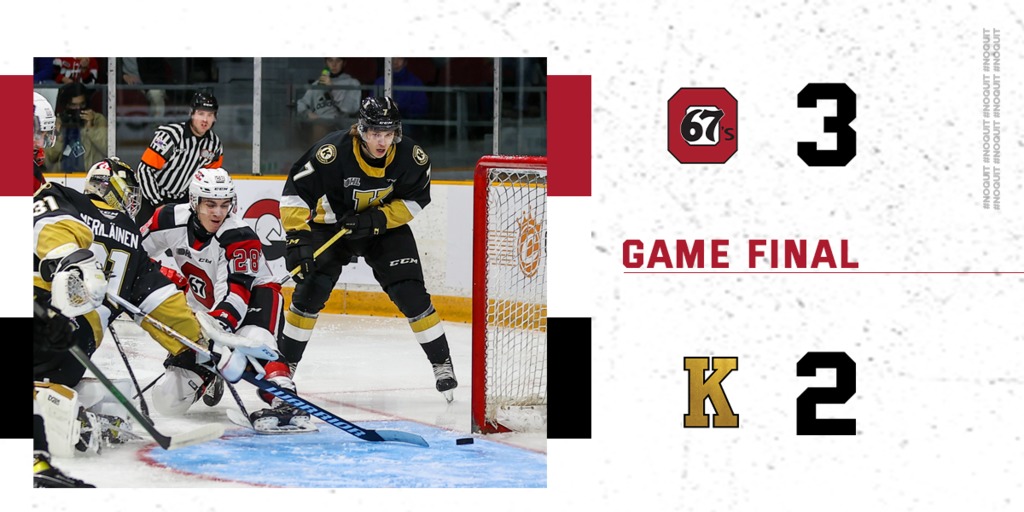 It had been exactly 19 months since the Ottawa 67’s last played a regular season game at the Arena at TD Place, and the return likely couldn’t have been any sweeter.

Vsevolod Gaidamak opened the scoring with his first career OHL goal, and Brenden Sirizzotti added a powerplay marker, before Jack Beck scored a gorgeous game-winner early in the third, as the Barber Poles defeated the Kingston Frontenacs by a final score of 3-2. Will Cranley was stellar in net for his team, turning aside 23 of 25 Kingston shots, including a series of quality chances in the game’s final minutes.

“I felt we were real solid for all 60 minutes, against a good team,” said head coach Dave Cameron, after his first win as Ottawa’s head coach, “They’re going to create a certain amount of chances, and they do it just because they’re a skilled team.”

“We didn’t turn pucks over to feed the chances that they’re good enough to create, and that was a difference in the game.”

It was much a better start for the 67’s than they had on Friday. Just 1:20 in, Adam Varga and Brady Stonehouse caused a commotion in the Kingston crease, and Gaidamak banged home his first OHL goal to give the Barber Poles a 1-0 lead.

Ottawa kept their foot on the gas, with physical play and a powerplay chance creating opportunities in the offensive zone, but it would be Kingston tying the game. Shane Wright was knocked down in front of the goal, but was able to chip the puck above Cranley to get the Frontenacs on the board, and make it a 1-1 score.

The 67’s were given another power play chance later in the frame, and after an extended period of offensive zone play, were able to take the lead once again. Sirizzotti took a pass from Anthony Costantini, and rifled a bullet of a shot over the shoulder of Leevi Merilainen, restoring his team’s one-goal lead.

Kingston logged the tying marker on a power play of their own with just 57 seconds to go in the first, when an Edmonds point shot found its way past Cranley through a maze of bodies, sending us to the second period tied 2-2, and with Ottawa leading the shots on goal totals 17-9.

The second frame saw both teams trade scoring chances, and powerplay opportunities, but both Cranley and Merilainen stood tall, keeping the game deadlocked. The 67’s went into the third period outshooting the Frontenacs 24-17, and searching for the go-ahead marker.

A tense third frame again saw both teams generate chances. It was the 67’s, though, that finally broke through just 4:40 in. A Frontenacs turnover saw the puck land on the stick of Beck in front of the goal, and a dazzling display of hands allowed him to roof the go-ahead goal, and send the Barber Poles crowd into a frenzy.

The Fronts pressed the issue with time winding down, after being afforded a late powerplay opportunity, but Cranley and the Ottawa penalty kill were flawless, allowing the team to skate off with their first win of the 2021-2022 season, by a score of 3-2.

It’s a bit of redemption for the 67’s, who were defeated 8-1 in Kingston during Friday’s season opener.

“I just think we came out more ready, we knew how they played after that first game. They had good systems, they were fast, and skilled,” said Beck, “We just thought we had to play gritty, get pucks deep and get on their ‘D’ and force them to make turnovers. That’s how we got all our goals.”

Up Next: The 67’s are back at home tomorrow, October 11, for a 2:00pm EDT showdown with the Oshawa Generals. TICKETS 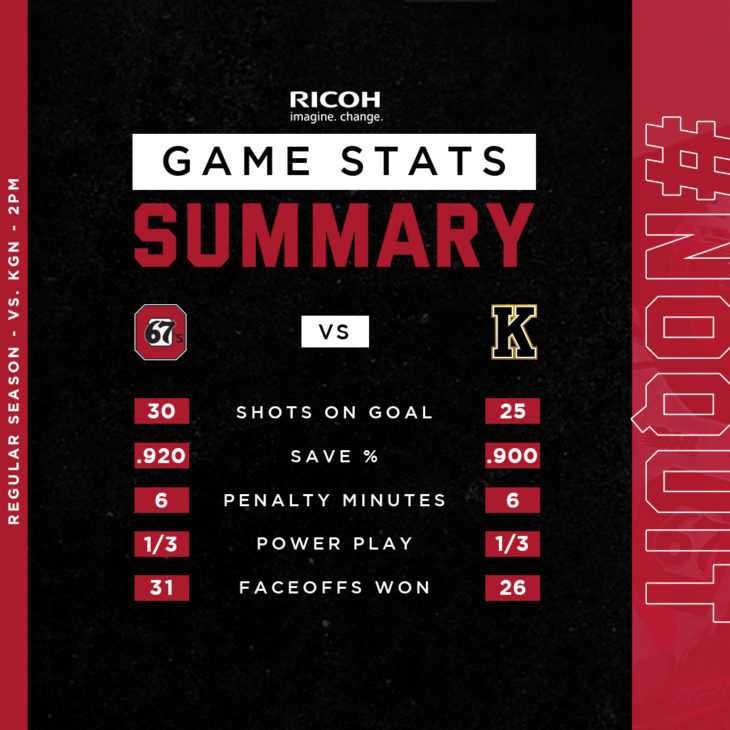