67’s lead slips away in loss to Otters 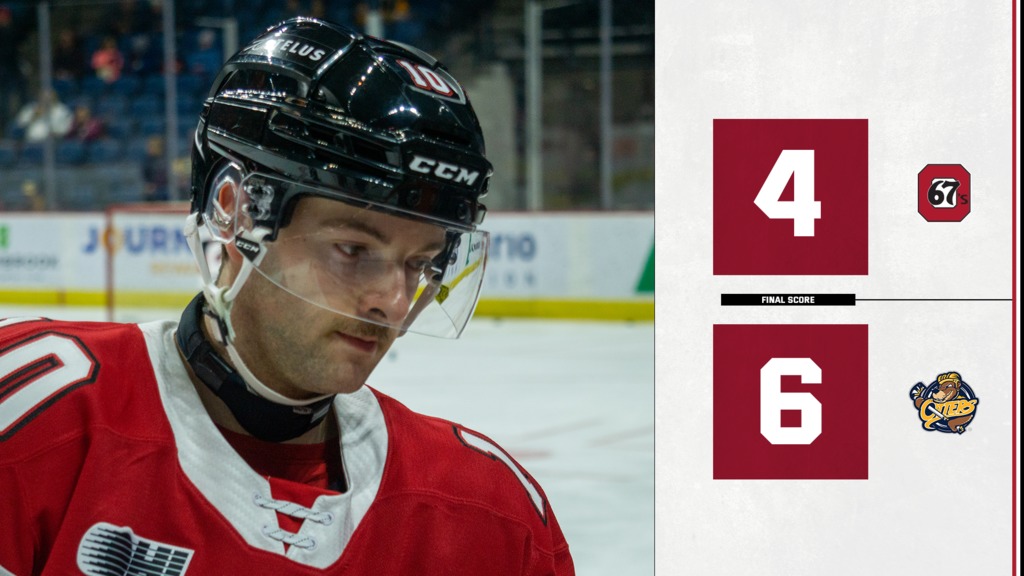 It’s a good problem to have, but the Ottawa 67’s haven’t been able to win more than nine consecutive games, this season.

The Barber Poles couldn’t capitalize on the chance to push their win streak to 10, Monday night, seeing a 4-1 lead evaporate in a 6-4 loss to the Erie Otters, due in large part to three second period powerplay goals.

The 67’s roared out to a convincing early lead, finding the opening marker just a minute and fifteen seconds in. Vinzenz Rohrer slid the puck to Pinelli, who ripped home a one-timer for his team-leading 12th of the year, and a 1-0 Ottawa lead.

Five minutes later, Chris Barlas picked up a loose puck in the Erie zone, and fed Gerrior. The local product cut to the goal, and despite being tripped up, scored his second of the year, to make it 2-0.

Later in the frame, Frankie Marrelli scored his first OHL point by getting the puck to Costantini, and the OA defender’s point shot beat Nolan Lalonde for a three-goal lead.

Liam Gilmartin returned fire for Erie, but shortly before the end of the period, the rebound of a Caden Kelly shot was knocked home by Quick for his first OHL goal, and the 67’s went into the second period up 4-1.

Unfortunately for Ottawa, the second period belonged to the Otters.

After the 67’s failed to capitalize on an extended five-on-three powerplay, Erie scored three powerplay markers of their own; courtesy of Carey Terrance, Brett Bressette, and Spencer Sova, bringing the score back to even.

With less than three minutes to go in the frame, Sova’s second of the night gave Erie a 5-4 lead, heading into the third.

The 67’s mounted a furious rally as time wound down, but were unable to solve relief goaltender Kyle Downey. An empty-net goal by Terrance with 12 seconds to play ended any hopes of another comeback victory, and the Barber Poles fell by a final score of 6-4.

Ottawa will look to start a new streak on Thursday, with a 7:00pm visit to the North Bay Battalion.