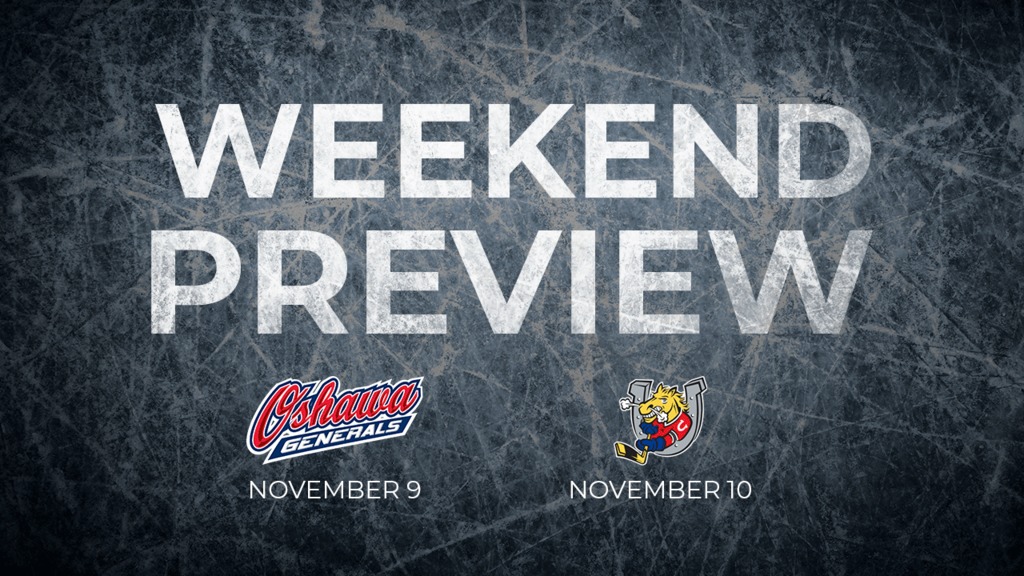 It’s back to the road for the Ottawa 67’s, who will put their seven-game win streak on the line beginning Friday night in Oshawa against the Generals, followed by a trip to Barrie on Saturday.

This will be the first meeting of the year between the Barber Poles and the Generals, while Ottawa defeated the Colts 4-3 back on_ .

With an OHL-best record of 16-3-1-0, the Ottawa 67’s have picked up at least a point in their past 14 games, winning 13 and losing one in overtime against Erie in mid-October.  Coming out winners in their last four games on the road, it is safe to say that André Tourigny’s squad is on fire as of late, and they will try to keep it going this weekend.

Leading the charge for Ottawa is the most productive line in the OHL , made up of Tye Felhaber, Marco Rossi and Austen Keating.  Felhaber leads the league in goals with 21 and is the league’s second-best scorer with 34 points.  Keating is fourth in league scoring with 31 points and leads the OHL in assists with 24.  As for Rossi, he comfortably leads the rookie scoring race with a total of 24 points.  The league’s second best in that department is the 67’s Jack Quinn, who has 13 points.  Rossi is the leading point-getter for all rookies in the CHL.  In nets, Cedrick Andree has been rock solid for the Barber Poles.  The Orleans native has not lost a game since September 28th and has won his last 13 consecutive starts, earning him the Goaltender of the Month award in the OHL for October.

Sitting at third in the East Division and sixth in the conference, Oshawa has all the makings of a playoff team. Led by NHL second round picks Jack Studnicka and Serron Noel, the Generals have won six of their last ten games after starting the season hot, where they scored seven goals in three of their first five games of the year.  Offense is not a problem for Oshawa, as they are well above average in the OHL with 67 goals for so far this season.  The Generals also have the third-best goals against total in the league with only 51 goals against.  Starting goaltender Kyle Keyser has a strong say in this statistic, as he has a league-best goals against average of 2.19 and the best save percentage as well.  While Keyser has been the team’s best player this season, he will have his handful against the most dynamic offense in the league in the Ottawa 67’s.

Stuck in what is one of the stronger divisions in the OHL, the Barrie Colts have had a decent start to their season despite the fact that they are not part of the top three in the Central Division.  The Colts have won four of their last six games and count on a high octane offense since the start of the season, led by veteran Lucas Chiodo and top prospect for the 2019 NHL Draft Ryan Suzuki.  Both players have put up 24 points so far this season, and have been helped by the arrival of Czech rookie forward Matej Pekar, who has put up 19 points in 17 games for the Colts’ 2018 import draft pick.  In net, Maksim Zhurkov is Dale Hawerchuk’s man of confidence, but he has not been stellar with a record of 6-4-0 and a goals against average of 3.08.  When Barrie came to town in the start of October, Ottawa defeated them 4-3, with Marco Rossi and Kody Clark both putting up two goals that day.