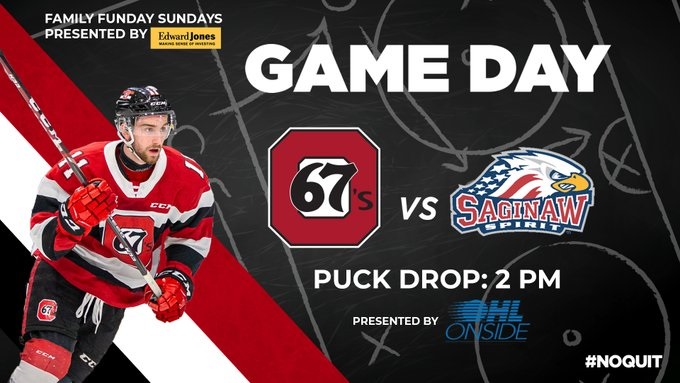 Winning streaks seem to be an ongoing theme for the Ottawa 67’s this season.  After a six game winning streak at the start of the season between October and November, the Barber Poles went on to have a franchise-record 17 game winning streak between November 16th and January 10th, not losing a game in between those dates.  The 67’s win streak recently came to an end on January 11th in Peterborough, but they have not lost a game since, beating four different teams in the process.  Now looking to extend their four game win streak to six after this weekend, it’ll be against an Eastern Conference rival in the Niagara IceDogs and a Western Conference force in the Saginaw Spirit that they’ll have to do so.

After being unable to use overage forward Austen Keating since January 11th, the Barber Poles will be able to count on their number 9, who has been a major factor in the 67’s offense this season with 57 points in 37 games.  Keating’s return will reunite him with his linemates Joe Garreffa and Marco Rossi, who have been one of the most dominant lines in the OHL this season.  Garreffa has put up an impressive 59 points in 31 games since joining Ottawa, while Rossi leads the OHL in points with 78 in only 35 games.  Another player to watch for the 67’s is Cobden native Jack Quinn, who leads the OHL in goals with 35.  Quinn is another player who is part of that impressive OHL crop of 2020 NHL Draft top prospects.

A confrontation to watch this weekend, one that will attract a ton of NHL scouts, is the one opposing Ottawa and Saginaw on Sunday.  The NHL’s Central Scouting list that recently came out features two names that will be going head to head in this game; number four ranked North American skater Cole Perfetti and the number five ranked North American skater Marco Rossi, which promises for an exciting contest on Sunday.

After having a very strong team and a very good year last season, this year is a little bit more of a down one for the Niagara IceDogs, who lost most of their major offensive assets in the summer, on top of losing Phil Tomasino and Akil Thomas before the trade deadline.  Getting the large number of draft picks in return of those two players, who were obviously Niagara two best players this season, was crucial for the future of the club, but means that this end to the year might be a little difficult for the IceDogs, who have only won three out of their last ten games.  With Tomasino and Thomas gone, the team now looks at overage forward Ivan Lodnia to lead the way offensively, which he’s been doing with 51 points in 30 games.  Gloucester native Oliver Castleman has also been solid for Niagara this season with 45 points.  In the cage, OHL fans will remember the scary incident involving IceDogs goaltender Tucker Tynan, which he thankfully came out of safe and sound, but has kept him out of action ever since.  This forced Niagara’s hand in acquiring the services of goaltender Andrew MacLean from Oshawa, who is still looking for his first win with his new team.

After being a force in the OHL’s Western Conference last season, as they finished third in the West standings, Saginaw are doing more of the same this season.  The Spirit are currently in third place of their conference’s standings, two points away from the first place Windsor Spitfires, and that, despite losing many key players from last season such as Owen Tippett, Bode Wilde, Ryan McLeod and their goaltender Ivan Prosvetov.  Leading the way for Saginaw this season, just like he did last year as a rookie, is 2020 NHL Draft eligible and top prospect Cole Perfetti.  Perfetti has put up 75 points in 43 games so far this year, good enough for second best in the OHL behind Marco Rossi.  Behind Perfetti in the Spirit’s offensive pecking order is Cole Coskey, who has 57 points in 44 games.  Last but not least, Saginaw made one of the biggest if not the biggest splash at the trade deadline, acquiring the services of forward Ryan Suzuki from the Barrie Colts.  Suzuki has been outstanding since joining his new team, putting up 11 points in five games.