67’s look to tighten up defence throughout three game weekend 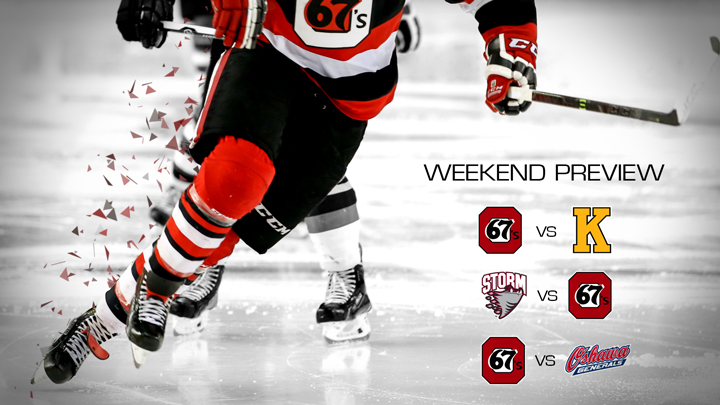 Three games in three days, with a home date sandwiched between two roadies, may sound like a lot for the average hockey fan.

Not so much for the Ottawa 67’s players and coaches.

“That’s junior hockey,” said assistant coach Mike Eastwood, with a dismissive laugh suggesting blaming a poor performance on the schedule is about as useful as dull skate blades. “It’s a weekend league, that’s how it goes. You manage your players, you rotate your goalies. You do what you can to get a win and move on to the next one.”

On Friday, the 67’s will kick off their first three-in-three run of the season when they visit the Kingston Frontenacs at the K-Rock Centre. The boys will hop on a bus from there and return home in time to host Guelph at TD Place on Saturday at 2 p.m. From there it’s on to Oshawa to close out the weekend against the Generals at General Motors Centre.

While not worrying too much about the tough turnaround between games, the 67’s are focused on tidying things up defensively. Despite scoring 25 goals in their last five games going back to Oct. 20, the 67’s have also given up 26 in that span.

“We’re scoring goals and that’s always a good thing, but defensively is where we’re struggling right now and we really need to improve there,” said Eastwood.

It would be easy to point a youthful blueline as a reason for the team’s defensive struggle, but Eastwood is quick to point out that breakdowns often start further up the ice.

“It’s a challenge of a young team for sure, but it’s not just our back end it’s the five guys on the ice, it’s the forwards just as much as the defencemen,” he said. “Everyone’s held accountable to playing strong defensive hockey and defence is hard work.”

Considering the schedule and the fact that the 67’s will be without three 16-year-olds – Peter Stratis, Kevin Bahl and Carter Robinson – who are away at the World U17 Hockey Championship – Eastwood said it’s key the team gets contributions from throughout the lineup.

“It’s really important for us to be able to play four lines,” he said. “Obviously we’re a little undermanned with our three guys at the U17s, so it’s important we get everyone going and into the game.”

A win for the 67’s on Friday night in Kingston would allow Ottawa to swap places with the Frontenacs in the OHL’s East Division and take over fourth, while great tickets are available for Saturday’s home date against Guelph as the 67’s look to make a charge up the standings.

Following Ottawa’s busy weekend, the 67’s will do it all over again next weekend, with three games in three days, all in the road, against Guelph (Nov. 11), Owen Sound (Nov. 12) and Mississauga (Nov. 13). The 67’s are back at TD Place on Friday, November 25 when they host Logan Brown and the Windsor Spitfires at 7 p.m.