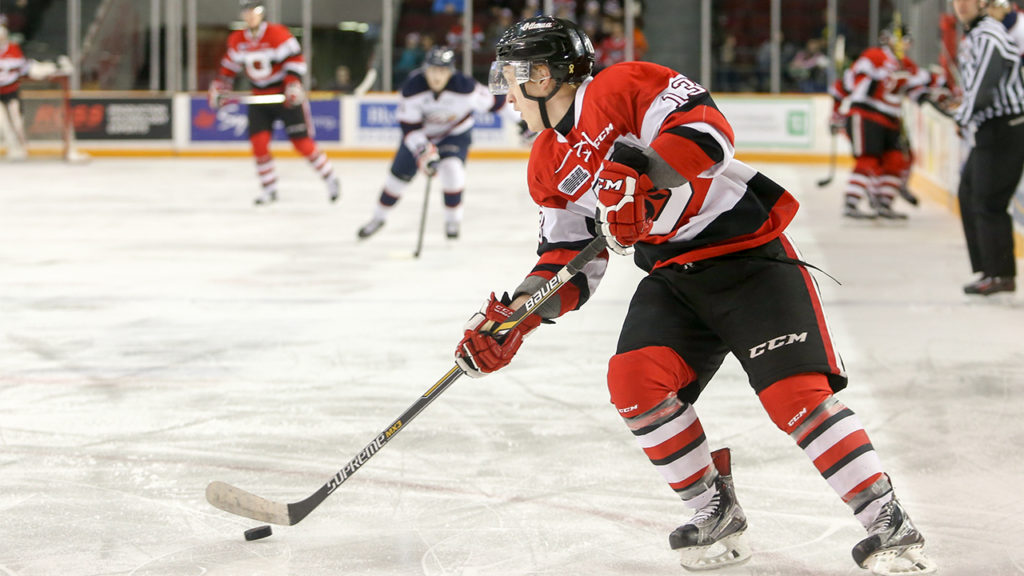 A late third period goal spelled the end for the 67’s for the second-straight game. Mitchell Stephens’s tally with four and a half minutes to go gave the Saginaw Sprit a 2-1 victory Saturday afternoon at the Arena at TD Place.

“Our guys played hard for the most part,” Brown said post-game. “There’s a lot of stuff we still have to work on, but it’s all coming together.”

Brown said he liked his team’s play in the first period and thought they were strong in the third despite a blip on the radar in the second where they were outshot 11-4.

Despite being heavily outshot by Ottawa, Saginaw jumped out to an early lead in the first period. A wrist shot from Brady Gilmour picked the near side corner of the net on 67’s starter Olivier Lafrenière, making the score 1-0 Spirit.

The lead wouldn’t last, though, as rookie winger Ben Evans potted his third goal of the young season, shovelling a rebound over the line at the 10-minute mark of the period to tie the game at a goal apiece.

However, it was Saginaw captain Stephens that crushed Ottawa’s hope of a home win late in the third. With four minutes to go, he snapped a sharp-angle shot passed Lafrenière. The 2-1 score would hold for the Sprit, giving them their second win of the season.

“They had the one chance in the third, and it went in,” Brown said of the final Stephens goal. “A lot of good things for us tonight, but it’s certainly tough to lose like this twice in a row.”

Ottawa now hits the road, and heads to Kingston for their second tango versus the Frontenacs tomorrow afternoon.

The 67’s will try to avenge their 2-1 loss at the hands of Kingston this past Thursday. Puck drops at 2 p.m. in Kingston at the Rogers K-Rock Centre.