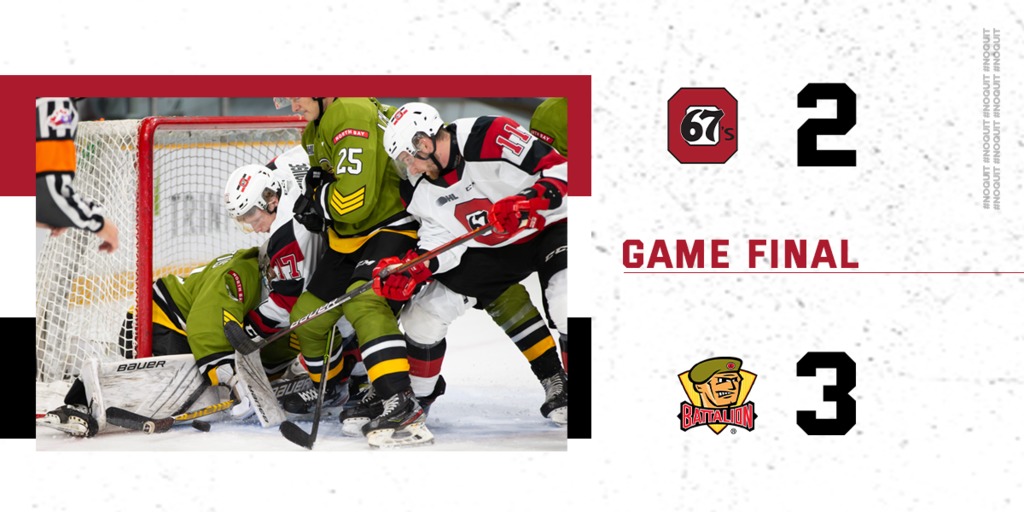 In a game that they arguably should have won, the Ottawa 67’s lost a nailbiter to the North Bay Battalion.

“It’s the third exhibition game, I thought we were better than we were than in the first two games,” said head coach Dave Cameron, “I didn’t like our first period tonight, I thought were much better the second and the third.”

The Battalion took control early, opening the score 4:47 in. A turnover at the Ottawa blue line found its way to the stick of Christopolous, all alone in front of the net. He had all kinds of time to pull the puck to his backhand, and make it 1-0 North Bay.

A powerplay less than three minutes later put the Battalion up by two. Jackson came out of the corner, and made a cross-ice feed to Nelson. He let go a one-timer that found its way past Ottawa goaltender Max Donoso, and gave his team a two-goal lead.

Ottawa formed a response from there, beginning to create some chances of their own. Finally, Ranvir Gill-Shane streaked into the North Bay zone, and threw a puck on net. After a mad scramble in front, Stonehouse corralled it on the doorstep, and banged home his first of the preseason, cutting the Battalion lead to 2-1.

The 67’s came roaring out of the gate for the second, seeing some dominant stretches of play in the offensive zone. They finally broke through at the 3:42 mark, when Brenden Sirizzotti collected a loose puck. He calmly waited out the Battalion defenders, before sliding the puck to Gaidamak, who tapped in his second goal in as many games to tie the score at 2-2.

Ottawa didn’t stop there, continuing to pour on the offence that would see them edge North Bay in the shots on goal totals.

Despite the surge by the 67’s, it was the Battalion that managed to break through. Jackson deflected a Wyatt Kennedy shot that found its way to the back of the net, restoring the one-goal lead for the Battalion.

A furious rally late in the third saw the 67’s come close to the tying goal, especially in the dying minutes with Donoso on the bench for the extra attacker, but the Battalion ultimately skated off with a 3-2 victory.

Though the result wasn’t what they were hoping for, the Barber Poles get an immediate chance at redemption, with a rematch against the Battalion in North Bay on Saturday, at 4:00pm EDT.

“I want us to have a better start, that’s for sure,” Cameron said, “but it’s been a long time between games for us here, so we’re excited to go on the road and get some more games in.”

Stonehouse, on the back of a strong performance, echoed his coach’s thoughts.

“We need to get more shots on net, crash the net,” said the 67’s forward, “we’ve got to [take advantage of rebounds] and finish when we can.”