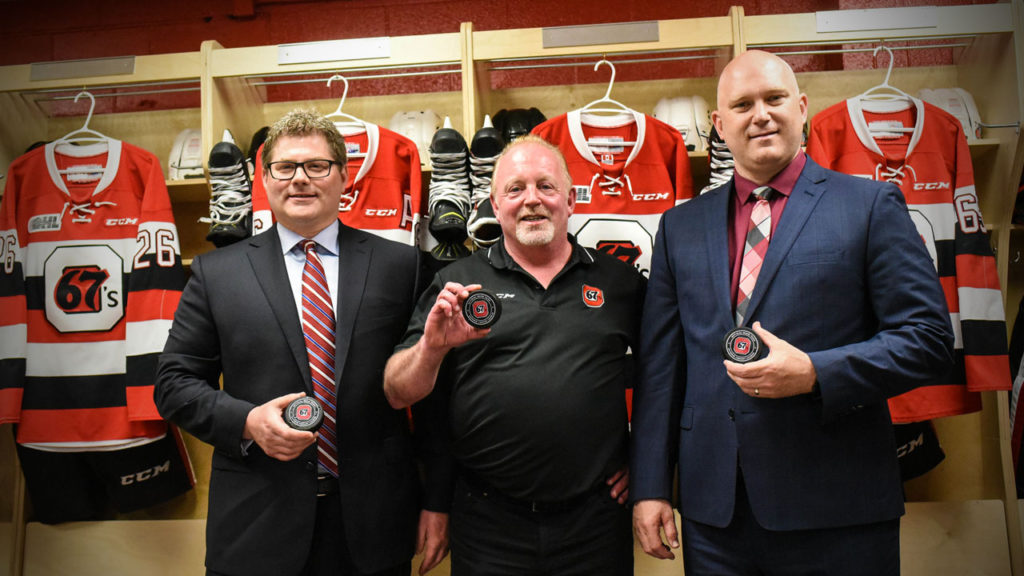 The Ottawa 67’s have their guys! The hockey club’s 50th Anniversary Season will feature a pair of key new faces that look to further the 67’s reputation into the next 50 years. On Tuesday, the 67’s unveiled James Boyd as General Manager and appointed André Tourigny (Tour-in-knee) as Vice-President of Hockey Operations and Head Coach.

“We’ve hit the jackpot here, this was a big decision for our hockey club and we scored big with James and André. There are 27 years of major junior coaching experience and 19 years of GM experience between them and both have been highly successful – we definitely got the right guys.” – said 67’s Governor Jeff Hunt

Boyd joins the 67’s after spending the last decade with divisional rival Mississauga where he led the high-scoring Steelheads to a Central Division banner (regular season) and the Eastern Conference title en route to OHL Final this past season. The Mississauga native has spent the last six years with Steelheads, with five of those six years serving as both GM and head coach.

“I am very excited to join OSEG and the Ottawa 67’s Hockey Club to continue building a championship calibre team,” said Boyd. “I look forward to working closely with Andre to assemble a coaching and management group that will provide the best support for our players on and off the ice.”

After playing three seasons in the OHL that included time with the Kitchener Rangers, Belleville Bulls and the Ottawa 67’s, Boyd turned to coaching in 1999 at the age of 23 and spent three seasons with Belleville as the assistant before taking over as head coach in 2003. From there, Boyd became an Associate Coach with the Toronto St. Michael’s Majors in 2004 remaining with the organization through their move to Mississauga in 2007 who became the Steelheads following the 2012 season. 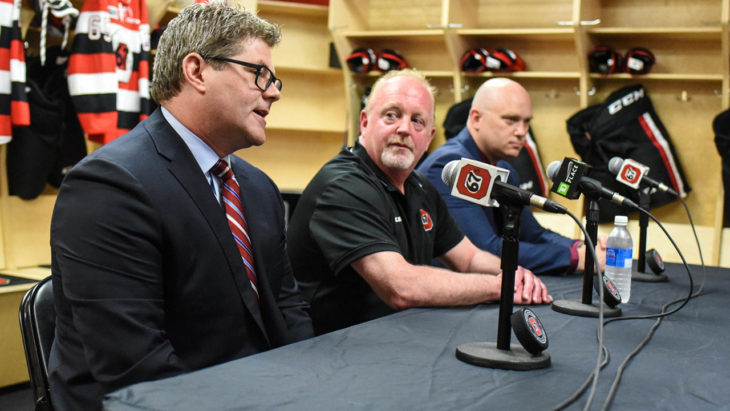 Tourigny, much like Boyd, boasts an impressive junior hockey résumé that began in 1998, spending two years as an assistant coach in Shawinigan. For more than a decade (2002-2013) he served as both GM and head coach of the Rouyn-Noranda Huskies where he won the QMJHL Coach of the Year in 2005-06. His commitment to junior hockey also served his country well as Tourigny was an assistant coach with Canada’s World Junior teams winning silver in 2010 and 2011. He joins the 67’s after spending the 2016-17 season as the head coach of the Halifax Mooseheads.

“My family and I are thrilled to join the 67’s organization, who becomes just the ninth head coach in the 67’s 50-year history. “This hockey club has such a great history and tradition. I look forward to working closely with James and the entire OSEG team toward our ultimate goal – building another championship team in Ottawa.” –  said Tourigny.

The Quebec native is no stranger to the nation’s capital where he served as an assistant coach with the Ottawa Senators in 2015 under Dave Cameron after spending the previous two seasons working with Patrick Roy in Colorado.

“Our talented, young team gained tremendous experience last season and when they come back this year that’s really going to show,” added Hunt “We’re going to be a very good team on the ice and I think we’re going to be the very best team in terms of the hockey leadership group.”

Last week, the 67’s unveiled the schedule for their 50th Anniversary Season that will open September 21 in Barrie, with their home opener set for Sunday, September 24 against the reigning OHL Champions, the Erie Otters.

The 67’s are planning several special game nights in celebration of the team’s 50th Anniversary Season. Details will be announced leading up to training camp.