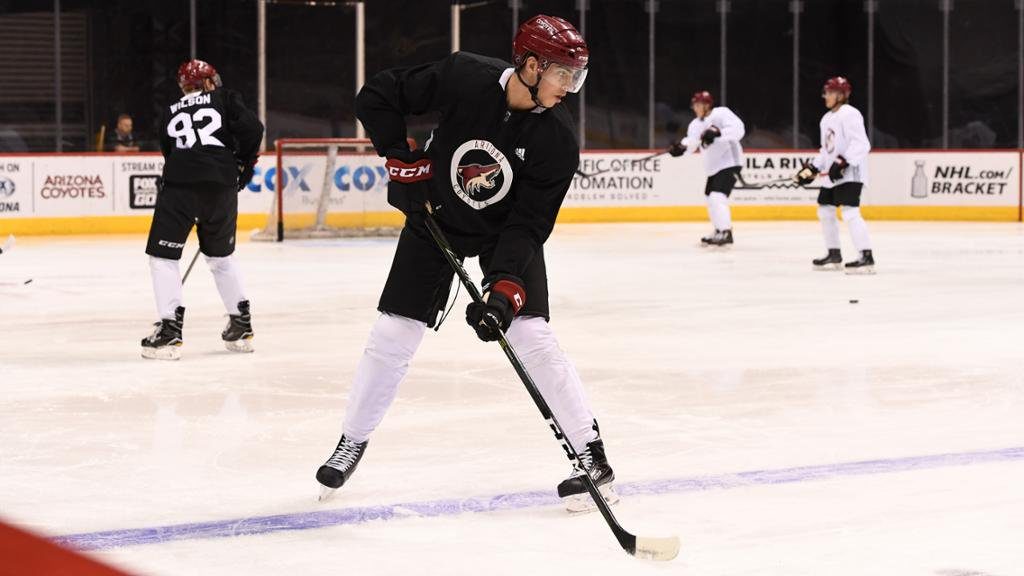 A total of 13 players that were part of the 2018-19 Ottawa 67’s roster will be participating in NHL Development Camps from various locations over the next few days. After seeing Nikita Okhotyuk and Graeme Clarke hear their names be called by the New Jersey Devils this past weekend, in the second and third round respectively, more 67’s players are being given an opportunity, as over half of last year’s team is attending NHL Dev Camps over the course of this week.  Players who went undrafted last week such as Noel Hoefenmayer, Cedrick Andree, Lucas Peric, Austen Keating and Hudson Wilson will be looking to catch the eye of the teams that invited them, while players who are already under NHL contratcs like Sasha Chmelevski, Kody Clark, Kevin Bahl, Tye Felhaber and Mikey DiPietro will also be taking a step forward towards their goal of someday cracking an NHL roster.

Having so many players be invited to NHL Development Camps is not only tremendous honor for the players themselves, but also a great opportunity for the guys whose rights are not owned by a team and that are being given a chance to prove what they are capable of.  It also speaks volume to the great work the Ottawa 67’s organization does to develop their own players, along with their skill and development program, in order to give the players the best chance possible to succeed.

Drafted in the 4th round (108th overall) by the Arizona Coyotes in the 2017 NHL Draft, Hoefenmayer was not signed to a contract by Arizona, which gave him a chance to re-enter the draft this season, but he was however not selected as a 20-year old.  Hoefenmayer had a career year for the 67’s last season, as he finished with 16 goals and a total of 62 points in 68 games, on top of adding 19 points in 18 playoff games.  Hoefenmayer will be looking to repeat this kind of season for the Barber Poles in 2019-20, and will likely find himself in a similar situation as Tye Felhaber last year when many NHL teams were lining up to sign the prolific free agent.

In what was likely his last season with the 67’s, barring any major surprises, Chmelevski was a dominant force for Ottawa last year, Chmelevski had a whopping 75 points in 56 games, before adding a team-best 31 points in 18 games over the course of the OHL Playoffs.  Chmelevski also had a great World Junior Championship last year, ending the tournament with 7 points in just as many games, and a silver medal. Acquired in the Travis Konecny trade during the 2015-16 season, Sasha has been a 67 for a while, and the organization has seen him grow into a tremendous player and leader.  Picked in the 6th round (185th overall) by the sharks in 2017, Chmelevski could definitely end up being a steal for the Sharks, and the 67’s family will be watching every step of his journey towards the NHL.

Pegged in to return for his fifth season with the Barber Poles in 2019-20, Keating was overlooked in his first year of draft eligibility back in 2017 and he hasn’t looked back since.  Keating jumped from 52 points in 2017-18 to 89 points last season, including a team-best 67 assists.  Playing on what was probably the best line in the OHL for the majority of the season made up of himself, Marco Rossi and Tye Felhaber, Keating caught the eye of the Stanley Cup champion St. Louis Blues, enough to earn himself an invitation to the St. Louis Blues’ roster for the rookie tournament they will be participating in, no the development camp.  Keating will be playing a big role for the 67’s next season, not only offensively but as one of the veterans and leaders of the team.

A Devils’ 6th round pick (172nd overall) in the 2018 NHL Entry Draft, Hoelscher emerged as a solid third line center for the 67’s, behind offensively gifted players like Marco Rossi and Sasha Chmelevski, Hoelscher should have an opportunity to show what he can do in a top-6 role as soon as next year.  In 68 games last year, Hoelscher had 10 goals and 30 assists for 40 points, but he blew up for 13 points in 18 games during the playoffs when he was put on a line with overage players Kyle Maksimovich and Lucas Chiodo.  Hoelscher will have an expanded role for the Barber Poles next year and is looking to make strides in his development starting this week at Devils Dev Camp.

The big, physical stay-at-home defenseman was invited to the Arizona Coyote’s development and rookie camp last season, but this year, he will be going to the west coast once again, as Wilson was invited to attend the San Jose Shark’s Development Camp, joining Sasha Chmelevski to the Bay Area.  Wilson was not only a leader for the 67’s off the ice, but also on the ice.  The Toronto native had a junior career best 19 points in 67 games last year, on top of finishing the season with a great +41 differential, proving he was one of the tougher defensemen to play against in the OHL last year.  Wilson will be back with the 67’s next year as one of the leaders of the squad once again.

Acquired in a trade from the Erie Otters just before the deadline last season, Maksimovich was instantly a perfect fit with the 67’s.  A veteran of five seasons in the OHL, Maksimovich has seen it all in the “O”.  From playing with Connor McDavid in his rookie season, to winning an OHL championship with the Otters in 2017, he brought a lot of experience to a young 67’s lineup.  In his last year of junior hockey, Maksimovich had a total of 81 points in 67 games, on top of adding 22 points in 16 games during the playoffs.  As he is graduating from the OHL, the 67’s wish Kyle nothing but the best in his path towards professional hockey going forward.

Another returning player for the Barber Poles, Peric was not drafted in his first year of eligibility, which was at this past draft over the course of last week-end.  However, playing on a very strong defensive squad, thus inheriting a lot less ice time than he would’ve most likely had elsewhere, Peric still managed to put up 17 points in 53 games, but a quality of his that definitely catches the eye of NHL teams is his ability to skate effortlessly.

Selected in the 2nd round (61st overall) by the Devils this past weekend, Okhotyuk is a smooth skating, physical defenseman who can also distribute the puck.  Okhotyuk, who will be returning to the 67’s next year as one of the two European players along with Marco Rossi, had a great year with the 67’s, finishing the season with 17 points and an impressive +30 differential.  Okhotyuk will look to make strides in his development with Ottawa starting next year in the 67’s quest to an OHL Championship starts once again in September.

Probably the best story in the 67’s eventful 2018-19 season, Felhaber blew up for 59 goals and 109 points in 68 games last year as an OHL overage player, on top of adding 17 goals and 28 points in 18 playoff games, for a total of 76 goals in 86 games.  Felhaber was signed as an undrafted free agent by the Dallas Stars in March, as he was undrafted in previous years.  Felhaber will be graduating to pro hockey as soon as this upcoming season, meaning not only will the 67’s lose a great player, but an even better human being.  Thanks for everything, “Felly”, and best of luck!

Heading to the Hurricanes’ camp along with Hoefenmayer is goaltender Cedrick Andree, who had a year to remember last season.  One of the OHL’s best kept secrets, Andree finished the year with 34 wins, a GAA of 2.48 and a .910 save percentage.  The Orleans native proved a lot of pessimists wrong with a stellar year and will be looking to repeat that next year as the 67’s starting goaltender.

Another player that was added to the lineup over the course of last season, DiPietro was acquired via trade from the Windsor Spitfires at the start of the month of December, right before he headed to the World Junior Championship in Vancouver, where he made a name for himself in front of the whole country.  DiPietro will also be turning pro, after an amazing junior career in which he won an OHL Championship and a Memorial Cup, among others.  The Canucks draft pick in 2017 (3rd round, 64th overall) had a short, but memorable time with the Ottawa 67’s.

Clark, who is also likely to graduate to the professional ranks as soon as this upcoming season, has played three seasons as an Ottawa 67’s player, with last year being his best by far.  Clark took some major steps forward in his development and in his play, clearly developing a mean and pesky side to his game that will go a long way in the pro ranks.  Clark had 17 goals and a total of 46 points in 57 games last year, on top of his 14 points in 18 playoff games.  Clark was signed early on to a contract with the Capitals at the start of last season, only a few months after he was selected in the 2nd round, 47th overall to Washington.

A 2nd round pick (55th overall) for the Coyotes in the 2018 NHL Entry Draft, Bahl had a big jump in production last year, going from 18 to 34 points.  Bahl also went on to add 11 points in 15 games during the playoffs.  The six-foot-six defenseman will also take part in Team Canada’s Summer Development Camp, which will be taking place in Plymouth, Mich. From July 27th to August 4th, which means we could also see Bahl represent our country at the next World Junior Championship.

As natural a goal scorer as they come, the New Jersey Devils couldn’t pass up on reuniting Jack Hughes and his trigger-man in Minor Midget, Graeme Clarke, whom they selected 80th overall in the 3rd round.  Clarke scored 82 goals in 81 games with Jack Hughes as a linemate in 2016-17 with the Toronto Marlboros.  Hughes is not the only teammate that Clarke will find at Devils Development Camp, as his 67’s teammates, Okhotyuk and Hoelscher, will also be attending, and representing the Barber Poles in New Jersey.  Last season, Clarke faired very well offensively in a limited role due to the quality of Ottawa’s roster, finishing the season with 23 goals and 34 points in 55 games.