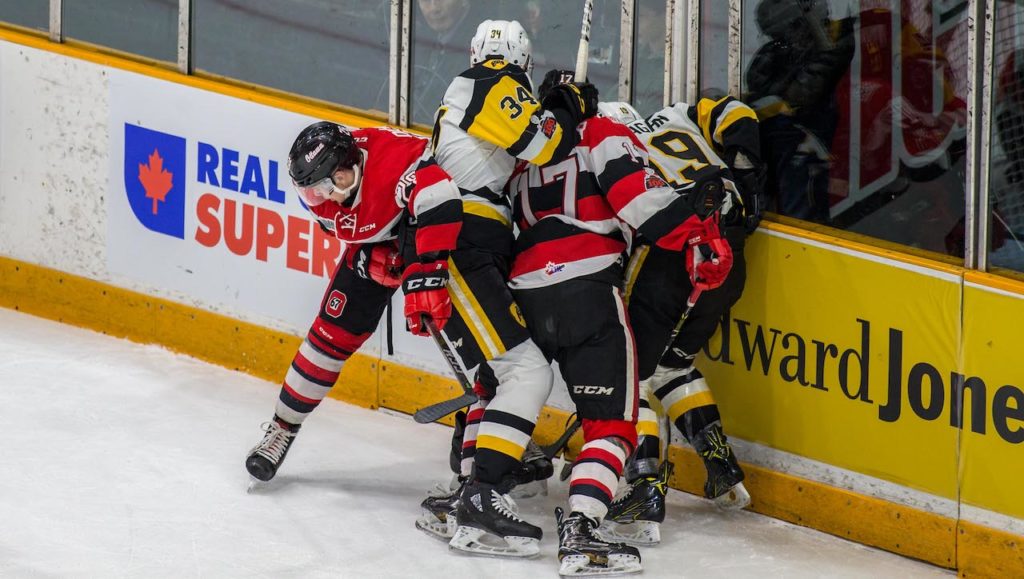 Ottawa 67’s came back to the Arena at TD Place with the series even at one on Tuesday night, only to face a Hamilton Bulldogs team that would steal the show with an 8-1 win.

For the second game in a row, Hamilton’s Will Bitten, the other half of the well documented Bitten brother duo, had the only goal of the first period in which Ottawa had enough speed and fire power to hold the play at a fairly even pace, standing just one shot shy of its opponent by end of the period.

But an unrelenting flurry of shots on Tremblay’s goal to start the period, followed by a series of penalties, left the Barber Poles climbing a steep hill by the end of the second frame.

Ottawa did send the message they were not done battling when Mitchell Hoelscher put one past the Bulldogs’ goalie Fulcher, assisted by Keating and Robertson. Unfortunately for the boys in red, they would go back to the locker room after two behind 5-1.

Hamilton added three more goals in the last period, out-shooting a too often depleted Ottawa side that couldn’t succeed in penalty kill on the night.

“A lot didn’t happen [tonight],” offered Head Coach André Tourigny following the game. “It happens, sometimes you have a bad day at the office. We’ll have to look at that. Obviously our special teams didn’t produce and we didn’t shut them down. A lot of things that worked for us in the first two games didn’t work at all tonight. We’ll learn from it and we’ll move on.”

The Bulldogs made adjustments, particularly on face-offs and on defence, including some serious shuffling of lines towards the end, that the 67’s coaching staff will be sure to look at leading in to the next game.

“We’ll have a good meal tomorrow, we’ll talk and flush it out,” added Tourigny. “If we can’t do that, then we have no chance. We want to win, we have a tight group and the guys feel bad right now. If at any point during the season this team had shown me they didn’t care, I wouldn’t have it tonight. But our team cares so much. And if I’m not in their corner when we have a bad night, they couldn’t trust me ever… so I’m in their corner.”

The Ottawa 67’s will not have time to dwell on this result as they will be back on the ice of the Arena at TD Place on Wednesday night for Game 4 (7:00 p.m.) before returning to Hamilton for Game 5 on Friday, March 30th.