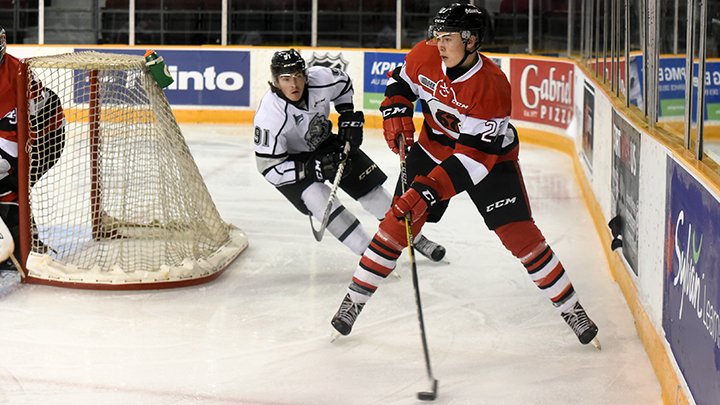 OTTAWA – For the second time in three days, the Ottawa 67’s got the better of the Gatineau Olympiques downing their cross-river rivals 6-5. The win gives the 67’s an even 2-2 record in four pre-season games with the OHL regular season starting less than two weeks from today.

Hudson Wilson and Connor Warnholtz, who scored the winner with just over four minutes left to play, found the back of the net in a back-and-forth third period. Goalie Leo Lazarev picked up the win in net.

Austen Keating, Ben Fanjoy, Drake Rymsha and Andrei Golikov also scored for the 67’s, who opened the scoring in the first and jumped out to a 4-1 lead in the second only to have Gatineau claw its way back into the game.

“We found a way to beat an older team for the second-straight game and that’s encouraging,” said head coach Jeff Brown. “A win or loss in these games doesn’t matter at all. It’s all about seeing what you have.”

After a chippy game in Gatineau on Friday night in which the Olympiques spent much of the game killing penalties, the 67’s once again capitalized onthepowerplay as sophomore forward Keating pounced on the loose puck to give his team a 1-0 lead.

That lead held up until the final moments of the first period when Gatineau’s Zack MacEwen beat Ottawa goalie Leo Lazarev with just 0.5 seconds left on the clock.

Ottawa would explode offensively in the first half of the second period as Fanjoy, Rymsha and Golikov all found the back of the net before the period was five minutes old. But the Olympiques would fight back as MacEwen, with his second of the afternoon, andNicolasMeloche, responded to close the gap to 4-3 after 40 minutes.

Wilson would again put Ottawa up in the third, only to have Gatineau once again knot things up before Warnholtz finally put the home team up for good.

The 67’s return to practice this week to prepare for their season opener on September 22 in Peterborough before returning home to open their home schedule against the Barrie Colts at TD place on September 25.