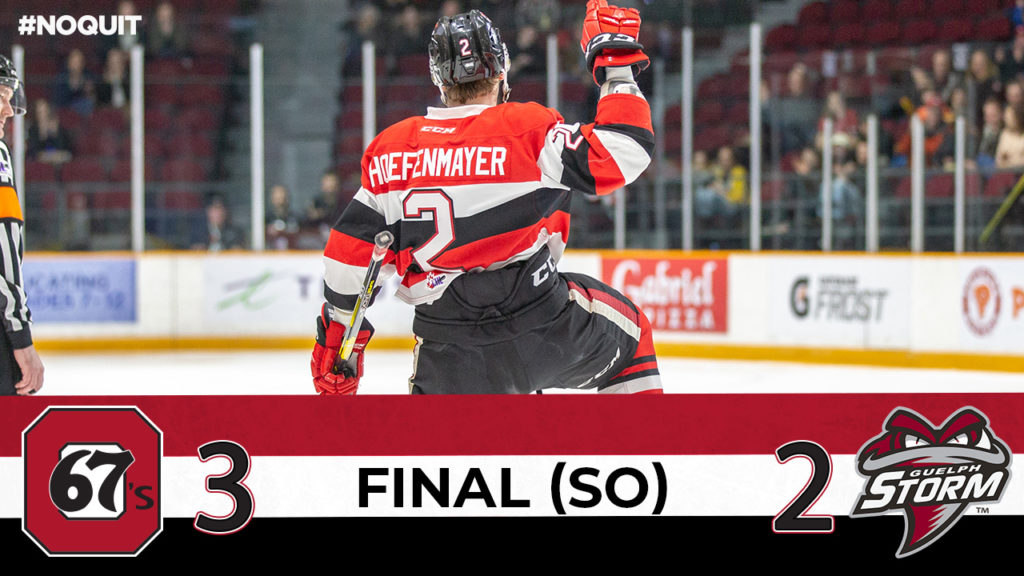 It may be a new season, but this year’s edition of the Ottawa 67’s brought that familiar #NoQuit attitude into Game 1 of the 2019-2020 OHL campaign on Friday night.

Riding a stellar, 27-save performance by goalie Cedrick Andree, the 67’s shook off giving up the game’s first goal just 1:30 in to down the Guelph Storm 3-2 in a shootout.

The 67’s faced an equally hot goalie in Guelph’s Nico Daws, who was busy in turning away 40 of 42 Ottawa shots. The two shots that beat him in regulation came courtesy of Marco Rossi, who tied the game early in the second, and Noel Hoefenmayer, who once again evened the game in the second after Guelph took a 2-1 lead earlier in the period.

Andree saved his best for late in the game, first stopping the Storm on a penalty shot with just over a minute left, then stoning them again with less than four seconds to go in regulation.

Guelph’s Danny Zhilkin scored the game’s first goal early on, at 1:30 of the opening frame, beating Andree with a perfect shot. Rossi leveled things up with a power play goal in the second, getting Ottawa on the board for the first time this season. Both teams would have a goal disallowed in the second period, before Pavel Gogolev gave Guelph their second lead of the game. That lead would last all of thirty seconds, as Hoefenmayer blasted a slap shot past Daws to level things up once again. Austen Keating and Cameron Tolnai both scored for Ottawa in the shootout.

Ottawa will be back on the ice Saturday night in Owen Sound, where they will round out their season-opening road trip against the Attack at 7:30 PM.

The 67’s home opener will take place on Sunday, September 29th in The Arena at TD Place when they host the Peterborough Petes at 2 p.m. Tickets are available here.