67’s down Otters in home opener 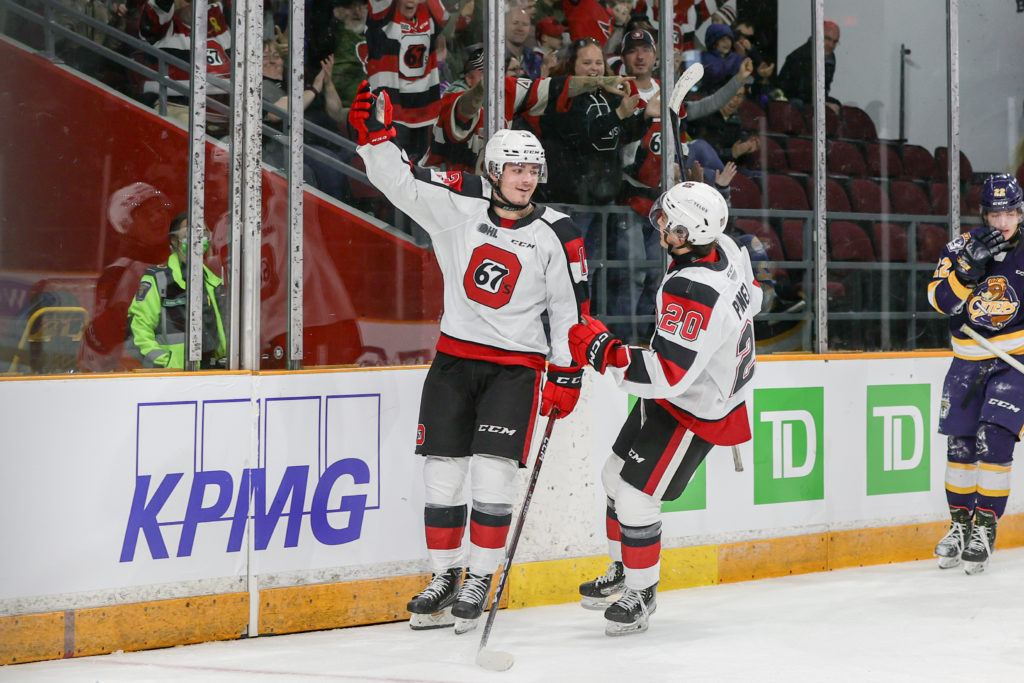 After scoring just 199 goals a season ago, the Ottawa 67’s have already scored 10 through their first two in the 2022-23 campaign.

The uptick in offence has yielded results on the ice, as the Barber Poles earned a second consecutive victory, downing the Erie Otters 4-2 in their home opener. Ontario Hockey League leading scorer Luca Pinelli scored the winner — his fourth goal in two games — with the others coming by way of Brady Stonehouse, Brad Gardiner, and Ottawa Senators prospect Tyler Boucher. Goaltender Max Donoso made 31 saves to secure his second win of the year.

“I liked the first two periods,” said Head Coach Dave Cameron. “We were all over the puck, and poised. We competed hard.”

Ottawa found themselves leading 3-1 after 40 minutes, but a late rally by the Otters made it a close game. Something Cameron signalled as an area for improvement, in an otherwise overall positive effort.

“In the third, we took our foot off the gas. We weren’t near as hard in any areas of the game. Give [Erie] credit. They kept coming, and made it real close to the end.”

It was a dominant first period for the Barber Poles, who held Erie without a shot until just after the midway point of the first period. The 67’s also had numerous chances on the powerplay, but Nicholls held firm, and these two teams were scoreless after one, despite the 67’s outshooting Erie 16-4.

Despite the hot start, the Otters struck first, when Elias Cohen took advantage of an odd bounce off the boards behind the Ottawa net, and tapped home his first of the year.

It didn’t take long, however, for the 67’s to return fire. On a gorgeous passing play, Jack Beck found Jack Matier, who hit a wide-open Stonehouse in the slot, and the second year forward made no mistake on his first of the campaign, tying the score at 1-1.

Less than two minutes later, Anthony Costantini passed off to Derek Smyth, and he slid it to Gardiner. From the top of the circle, the Aurora, Ontario product let go a laser of a shot that beat Nicholls up high, making it 2-1 in favour of the 67’s.

Now with two goals in as many games, after having scored just three a season ago, the 17-year-old Gardiner points to a strong offseason as the reason for this season’s early success.

“Everyone put in a lot of work this summer, so it feels good to get a few points on the board there,” said Gardiner. “My goal coming into this year wasn’t just trying to be in the lineup. I wanted to contribute.”

Late in the frame, Matier and Beck connected again, getting the puck to Pinelli, whose slot shot was good for his fourth of the season.

The Otters made a game out of it 1:21 to go, with Malcolm Spence’s first OHL goal chipping into the Ottawa lead, but the empty-netter by Boucher with 57 seconds to go iced a 4-2 win for the 67’s.

Up Next: The 67’s are next in action on Friday, hosting the Kitchener Rangers in a 7:00pm tilt inside The Arena at TD Place.