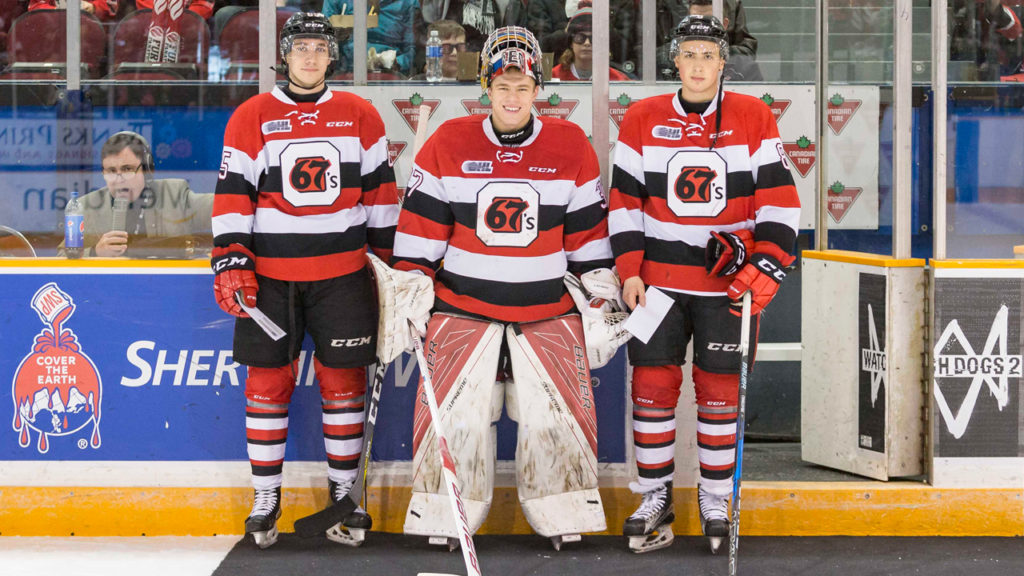 Four members of the Ottawa 67’s were recognized on Sunday for their academic achievement. Carter Robertson, Peter Stratis, Sasha Chmelevski and Leo Lazarev were all honoured prior to puck drop of the final regular season contest of the OHL season – the playoffs are set to open later next week.

Each and every month during the season one player is recognized for their academic work. For the month of March, Carter Robertson was named the Academic Award recipient.

Every year each OHL team nominates student players for the following awards:
– The Ivan Tennant Award for the team’s top high school student
– The Bobby Smith Award for the Top Scholastic player
– The Roger Neilson Award for the top college or university student

The Ottawa 67’s Hockey Club would like to congratulate the award winners for 2017:

Ivan Tennant Award: Peter Stratis
The 67’s 2016 first round pick has flourished on the ice in his first OHL season and his talents in the classroom have also been top notch.

Bobby Smith Award: Sasha Chmelevski
Ranked in the Top-100 NHL Draft rankings (38th), Sasha Chmelevski has also shown his academy strengths as the top scholastic player with the 67’s.
Roger Neilsen Award: Leo Lazarez
His focus and concentration on the ice is helping the 67’s return to the playoffs for a third straight season while off the ice his focus and concentration in the classroom as earned Leo Lazarev the Roger Neilsen Award as the top college student in the hockey club.