67’s pre-season ends with an overtime thriller in Gatineau 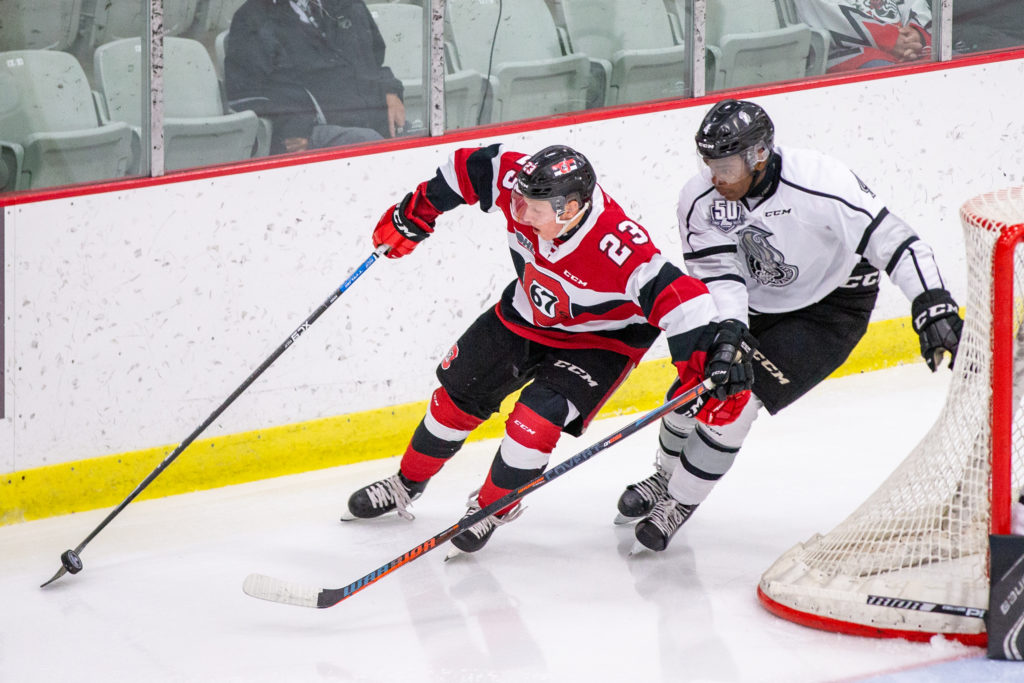 The Ottawa 67’s rounded out their pre-season schedule on Saturday, in a 6-5 loss in a shootout against the Gatineau Olympiques, in what was as entertaining a pre-season game as you’ll ever see.

Ottawa took an early two goal lead in this one, with goals coming from Yanic Crete and Felix-Antoine Tourigny before the halfway point in the opening frame.  The 67’s seemed to be in total control of this game for the first twenty minutes, pushing the pace and testing Gatineau goaltender Creed Jones on multiple occasions with quality scoring chances.

The pace and tempo was still very upbeat in the second period, as both sides are now gearing up for the start of their respective regular seasons.  Both goalies were kept very busy during the second, as Ottawa outshot Gatineau 14-10.  However, it took 19:27 for another goal to be scored, a beautiful tic-tac-toe play finished off by newcomer Dylan Robinson, giving the Barber Poles a three to nothing lead going into the third period.

The Olympiques showed early on in the final frame that they were not ready to back out of this contest.  Gatineau took advantage of the 67’s lack of discipline and scored three goals within 8:30 in the third period, tying things up, which made up for a promising end to the game.  The Olympiques then scored two goals in under a minute, from the sticks of Zachary Fortin and Manix Landry to give them a two goal lead with just about two minutes to play, but Ottawa was not out of it just yet.  Down 5-3, Ottawa was able to force an overtime with goals from Alec Belanger and from Jack Beck, who tied it up with just 12 seconds left on the board.

There was only one way to finish off such an exciting pre-season game, and it was with a three on three overtime.  Olympiques forward Charles-Antoine Roy was awarded a penalty shot halfway through the overtime period and went on to give his team the win when he slipped the puck past Cedrick Andree, who had a solid night in goal despite any indication from the final score, with 35 saves.

This was Ottawa’s fifth and final game of their pre-season calendar.  The team will now be going back to business as soon as next week, as they open the OHL season on Friday, September 20th in Guelph when they take on the Storm in a 2019 OHL Finals rematch.

The Barber Poles’ home opener will be on Sunday, September 29th, when they host the Peterborough Petes at 2:00 PM in The Arena at TD Place.