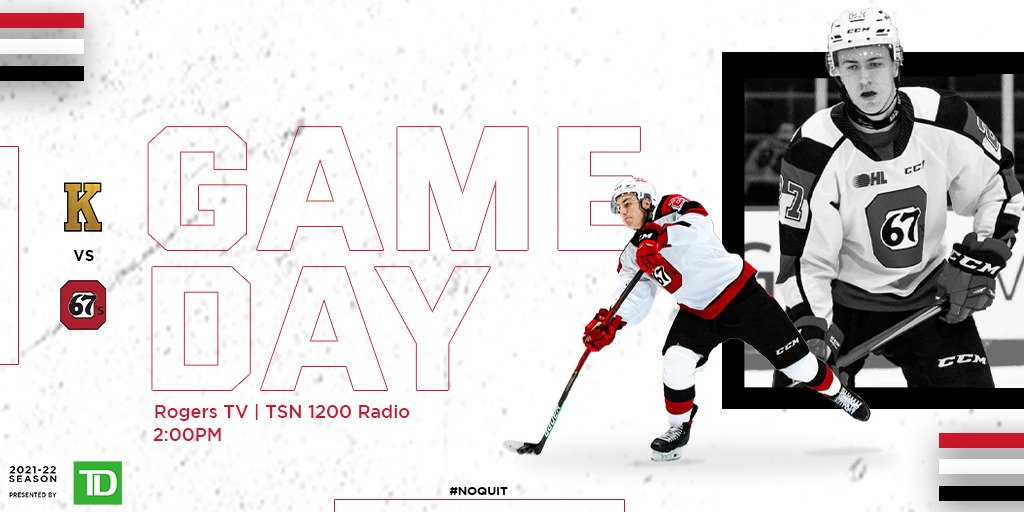 19 months to the day of their last regular season home game, the Ottawa 67’s are finally returning to The Arena at TD Place. With Barber Poles fans back in the stands, the 67’s will take on the Kingston Frontenacs, for the second time in three days. Puckdrop is scheduled for 2:00pm EDT, and 67’s fans can listen live on TSN 1200, or watch all the action with a CHL TV subscription.

Ottawa opened the 2021-2022 regular season against the Fronts at the Leon’s Centre, Friday night. Dylan Robinson scored a powerplay goal, assisted by Jack Beck and Anthony Costantini, while goaltenders Will Cranley and Collin MacKenzie combined to make 27 saves, but Kingston handed the 67’s an 8-1 defeat on Opening Night.

The Frontenacs, who are playing their third game in as many nights, had similar misfortunes on Saturday, however. They received goals from Francesco Arcuri, and Maddox Callens, but both came after seven unanswered from the Mississauga Steelheads, who ultimately won by a final score of 7-2, in Kingston.

There are all kinds of exciting reasons to come out to the rink for Ottawa’s Homecoming Weekend, including free t-shirts for the first 1000 fans through the doors. Tickets are still on sale here.