67’s Rohrer Set to Take “Next Step” at NHL Draft 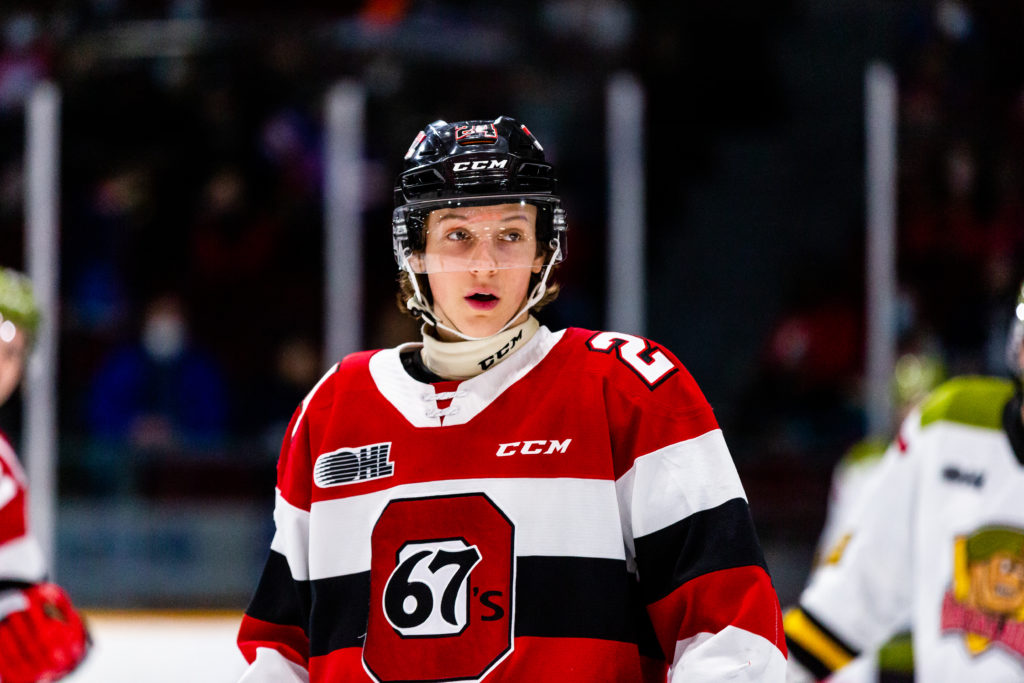 Vinzenz Rohrer is an impact player.

The Ottawa 67’s forward proved as much, if not more, in his first Ontario Hockey League season; finishing as the team’s leading scorer, with 25 goals and 23 assists for 48 points in 64 games. He has earned rave reviews from coaches, and teammates alike for his infectious positive attitude, and leadership skills.

But there is one area that he is perhaps most proud of his impact.

At this week’s 2022 NHL Entry Draft, taking place Thursday through Friday, Rohrer is set to become just the 17th Austrian-born player to be drafted into the NHL, following forward Marco Kasper (selected by Ottawa in the 2022 CHL Import Draft), who is projected to be a first-round pick, Thursday night.

The weight of such an achievement is not lost on the 17 year-old Rohrer, as he looks back upon his hometown of Feldkirch, and the Austrian nation at large.

“I think it really is a big thing for the young players,” said Rohrer. “You feel it on the Austrian side, when you’re back home. People really see that as a big thing. It’s nice to represent Austria, and maybe show a little kid that they can really do it.”

The past calendar year or so has been something of a whirlwind for Rohrer. Pandemic aside, he has gone through an Import Draft that saw him wind up with the 67’s, appear in his first OHL action, represent Austria at the ill-fated 2022 IIHF World Junior Hockey Championship, earn an invite to the Kubota CHL Top Prospects Game, and now finds his attention on the NHL Draft, where he is projected to be picked somewhere within the second or third round.

Being the thoughtful, intelligent young man that he is, Rohrer breaks everything down incrementally. He describes making the decision to come to Ottawa, then focusing on making the team, then putting more responsibility on himself after realizing that he was a top player, and taking that to another level during the team’s first-round playoff battle with the North Bay Battalion.

All in all, it was a season that Rohrer feels he can look back on with fondness.

“I was even better than I expected it to be,” he said. “I have a good billet family, and the environment around the team was also really good, and then hockey wise, I think it was a really good season for me.”

Rohrer is perhaps being a bit modest, in saying so. He rocketed up draft rankings as the season went on; due to his production, and standout play in both ends of the ice, be it at centre or on the wing.

The person most complimentary of Rohrer may have been his coach, Dave Cameron.

“No matter what his ceiling is, he will reach it,” said Cameron. “It’s ingrained in him. His progression curve is infinite.”

The next stage of that progression is, of course, the NHL. When Rohrer does hear his name called at this year’s draft, he will be attending live in Montreal with his father, Stefan, and as the day creeps closer, he says the excitement is beginning to grow.

Rohrer is keeping his eyes on the prize, though, and while he is eager to share such a special moment with his family, the next progression is never far from his mind.

“Maybe it’s a little different, coming from Austria, but in the end, it’s just a little step,” said Rohrer. “You’re going get a number, but now it’s the time where the really good hockey begins. I think you have to really look at like that, and not just say, ‘alright, you made it now’.”

A steely-eyed focus on being the best player he can be does not deter Rohrer from relishing the experience, though. He has enjoyed being in the hockey-mad city of Montreal, with his dad, even running into now-familiar NHL scouts, while exploring town, and seeing the sights.

“My dad is probably more excited than me, right now,” he said with a smile.

Though exciting is the prospect of being drafted to the NHL, so too is the idea of returning to the 67’s, next season. With a roster largely turning over from last year, and on the heels of a strong draft, Rohrer adds yet another NHL-recognized name to a roster that hopes to contend for a championship.

“We are still pretty young, but not that young anymore. So if we play our best hockey, I think that’s kind of the formula you want from a good team.”

With a rescheduled World Junior tournament to follow the draft, and fall training camps immediately on its heels, it’s just another whirlwind period for Rohrer. As he always does, though, the budding star is taking it all in stride.

Where he may land is simply the next step.