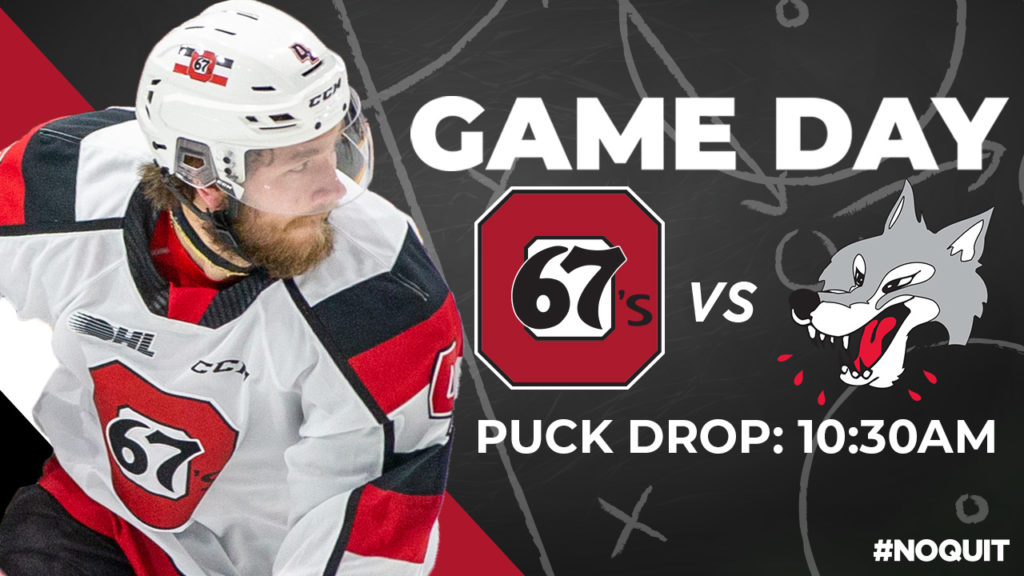 After a successful road trip this past week that saw the 67’s win two out of their three games on the road in a span of four days, the Barber Poles are now back where they had people used to seeing them last season; atop of the OHL standings.  Now first overall in the league with 30 points in the standings and a record of 15-6-0-0, Ottawa will look to strengthen their lead this week with two important matchups, including one against the team who is trailing them the closest in the Sudbury Wolves.

These two upcoming games have a little bit of extra incentives for the Barber Poles, as the one on Thursday morning will obviously be their School Day Game, where thousands of screaming kids are expected to raise the roof inside The Arena at TD Place.  On Saturday, when the 67’s host the Steelheads, all of Canada will be able to watch this game, as it will be nationally aired on Sportsnet starting at 3:30 PM.

With eight wins in their last ten games, it’s no surprise that Ottawa find themselves on top of the mountain right now in the OHL.  After somewhat of a slow start compared to what some of the expectations were, it seems that the Barber Poles have really picked up the pace now and, despite some major injuries to key pieces, find themselves right where they want to be.  The first team to have reached 15 wins in the OHL thus far this season, the 67’s are offensively lead by their dynamo of a first line composed by overagers Austen Keating and Joseph Garreffa and 2020 NHL Draft prospect Marco Rossi.  This line has been incredible for Ottawa since Garreffa was acquired in late October, and it has certainly been the OHL’s best line ever since.  Cedrick Andree has also been more than solid in front of the cage, as he is among the leaders in all major categories for goalie stats; he is second in GAA with 2.57, second in save percentage with a % of .914 and is second in wins with 11, on top of posting a shutout this season.

It’s a familiar squad that will be rolling into The Arena at TD Place on Thursday morning, as it’ll be the Sudbury Wolves, Ottawa’s opponent in the second round of the playoffs last year, which ended in a sweep in favour of the 67’s, as we all know today.  This Wolves team, however, is not that different on paper, but it is a group that has grown together and that gained a full year of experience last season.  Now at second overall in the OHL, just behind the 67’s, this makes it a crucial matchup for the top spot in the OHL standings.  After the loss of star goaltender Ukko-Pekka Luukkonen in the offseason, Quinton Byfield has stepped up as the team’s go-to guy.  Byfield, who is currently battling to be the first overall pick in the 2020 NHL Entry Draft, has piled up an impressive 44 points in 23 games so far this season.  Byfield has by far been the catalyst for Sudbury this season, but another OHL first overall pick in 2015, David Levin, has also been making his presence felt with 31 points in 18 games.  This will be the very first time these two sides faceoff since the 67’s won Game 4 in the second round of the playoffs in Sudbury last season.