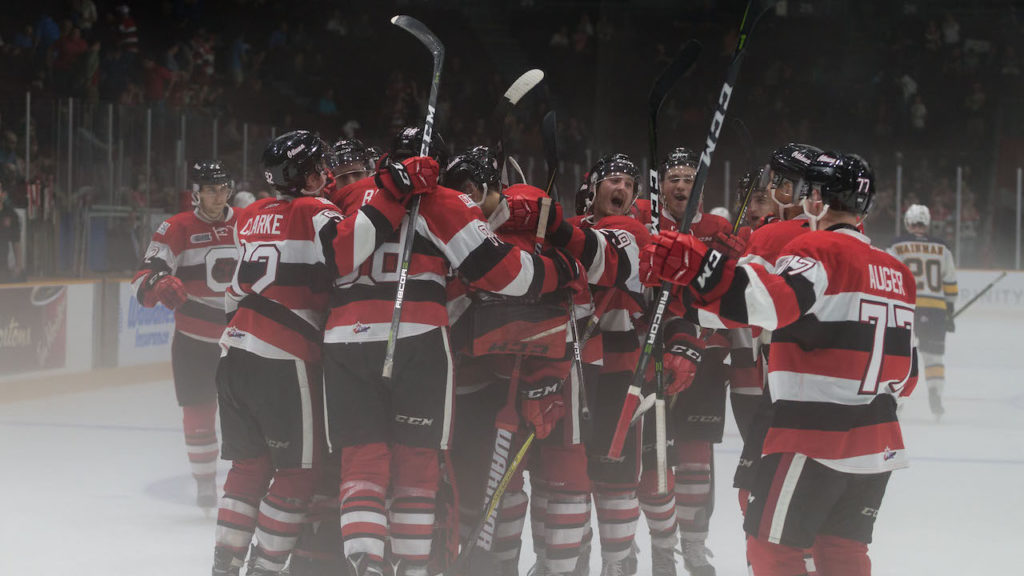 On a night when the Ottawa 67’s honoured their past off the ice, on the ice they highlighted their bright future with a goal-filled home opener that brought the crowd of 5386 to their feet at least six times en route to a 6-4 win over the reigning OHL Champions, Erie Otters. Lead by Austen Keating’s fourth career hat-trick, the Barber Poles were dominant on the power-play that included Graeme Clarke’s first career OHL goal that also stood to be the game-winner.

On one of the hottest September nights experienced at Lansdowne, the 67’s and Otters got off to a scorching start, combining for six goals in the opening 20 minutes.

Erie opening the scoring less than four minutes into the game through Carson Edwardson’s first of the season. 33 seconds later, Sasha Chmelevski pulled Ottawa level with a rocket of a shot top corner.

With less than five minutes remaining in the period, Kyle Maksimovich restored the Otters lead only to see the resilient 67’s claw right back. Tye Felhaber scored for a second straight game 40 seconds later to knot the game at 2-2.

43 seconds after that, Austen Keating netted his first of the young season short-handed, burying the Travis Barron rebound to push the Barber Poles into the lead. That lead was short lived and Gera Poddubnyi tallied on the power-play 37 seconds later to send the teams into the dressing room tied at 3-3.

Austen Keating broke the tie at the 13:55 mark of the second period netting his second of the night on the power play.

In the final minute of the middle frame, Graeme Clarke fired home the 67’s second power-play goal of the night and his first career OHL goal sending Ottawa into the break up 5-3.

Just over two minutes into the third, Austen Keating completed the hat-trick on the power-play with Clarke and Foget drawing the assists putting the 67’s at 3-for-4 with the man advantage on the night.

Jordan Sambrook added a late marker for the Otters, but Olivier Lafreniere made some timely saves in the final minutes of the game to help the Barber Poles post their second straight win.

Prior to the game, the 67’s honoured alumni from 1967-1977 in the first of five games that will celebrate each decade of their history this season.

“The start of the game with the presentation with all the alumni and the history was a good thing. We were nervous but we were excited to come out so I’m really happy with the result.” – Head Coach Andre Tourigny


“During the two road games the points weren’t coming and it can get frustrating, but the coaching staff did a good job keeping me personally calm and that things will start to happen. Having Travis (Barron) back is key, especially when he’s on your line. He makes so many things happen, especially with his body checks and speed. Same with Foget, they make the game a lot easier. So, I can’t say enough about those two.” – Austen Keating