67’s set to celebrate past and climb the standings 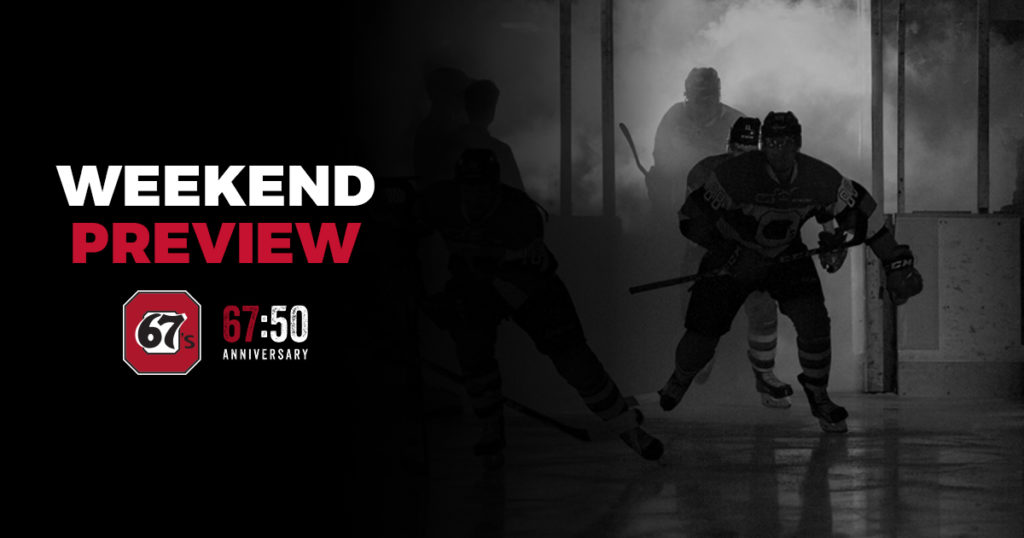 The Ottawa 67’s will be looking to close out 2017 on a high note with a strong performance in the last weekend of the year. Coming off a close 2-0 loss to Kingston in which the Barber Poles outplayed the Frotnenacs, the 67’s enter the weekend with a pair of important games.

The first, on Friday night against the Oshawa Generals, marks a major milestone in the journey of the 67’s as they celebrate their inaugural game at the Civic Centre, which was held 50 years ago to the day.

It was on December 29, 1967 that the Barber Poles played their first-ever game, against the Montreal Junior Canadiens at the Civic Centre, now The Arena at TD Place.

This momentous occasion will be a moment to cherish for the team and fans alike as the organization takes a trip down memory lane to the very beginning. Score your seats for tonight’s historic game by clicking here.

On the ice, this weekend’s clashes will all be between teams in the East and provides the 67’s with a great chance to grab crucial wins over direct competition and keep pace with the pack in the conference.

After two losses, the Generals have registered three consecutive victories. The 67’s have won three out of their last five encounters against the Generals but the last meeting between these two sides resulted in a 5-3 loss for Ottawa. The Barber Poles are currently just one point behind the Generals, who currently sit fifth in the East, and the 67’s will be looking to jump back in front. The 67’s can expect a rough game with Generals’ Sean Allen currently on top of the OHL standings in penalty minutes, having spent 67 minutes in the sin bin.

The Petes are struggling heading into the weekend, having registered a six-game losing streak. In those six contests they have conceded 20 goals. This losing streak has put them near the bottom of the East. The Petes have a better head-to-head record against the 67’s, having won three out of their last five games but Ottawa has closed the gap with wins in their last two meetings.

HOW TO TUNE IN