OTTAWA –  The Ottawa 67’s made it three consecutive wins on Saturday afternoon, when they defeated the Hamilton Bulldogs in a 5-0 shutout win in front of 3,986 fans inside The Arena at TD Place.  Mitch Hoelscher and Jack Quinn were the goal scorers for Ottawa, as Quinn collected his third hat trick of the season, while Hoelscher added two of his own.  Will Cranley stopped 27 pucks for his second shutout of the season.

It took a while for one of the two teams to put up the game’s first goal on the board, but it was Mitch Hoelscher who did so, thanks to his 23rd of the season scored shorthanded at 18:10 of the opening twenty minutes.  Ottawa was able to out shoot the Bulldogs 11-8 during that period, played in a playoff style of hockey with lots of hits and energy.

Only one goal was scored in the second period as well, coming from Jack Quinn, his team-leading 32nd of the campaign.  Quinn completed a nice passing sequence set up by Rossi and Hoefenmayer on the power play, giving Ottawa a two-goal edge heading into the third.

The Barber Poles would put a stamp on this win in the third with three goals, making it five unanswered.  Quinn made it 3-0 3:57 into the first with a shorty, assisted by Hoelscher.  Ottawa’s number 17 would add another one on the power play just over two minutes later by tipping a Noel Hoefenmayer shot behind Zach Roy.  Quinn would complete his hat trick with his second power play goal, set up by Hoefenmayer and Hoelscher.

The 67’s will round out their three-in-three week end on Sunday evening in Oshawa, where they will face their division rivals, the Generals, with the puck drop scheduled for 6:05.  They’ll next be in action at home on Saturday and Sunday next week, when they host the Niagara IceDogs and the Saginaw Spirit in back to back 2:00 PM start times.

“It’s all about the mindset, and I loved the mindset today.  They played with urgency and we played with a lot of structure and purpose defensively.  I’m really proud of the leadership of our team and how everyone reacted.”

“I liked the push back from our guys.  They sent a message that kept everybody honest on the other side, so I think we have a little bit of everything in our lineup, we have skill for sure, we have really good defense but we also have toughness, guys who can hit, guys who are relentless, we have speed.  I think everyone chipped in today.”

“We’re really happy with our game .  I think what separates us from other teams is for example yesterday we won in a shootout, but we weren’t really happy with the way we played defensively, but we came out committed to defense and we got a shutout, so it was a really good job by everyone in our locker room today.” 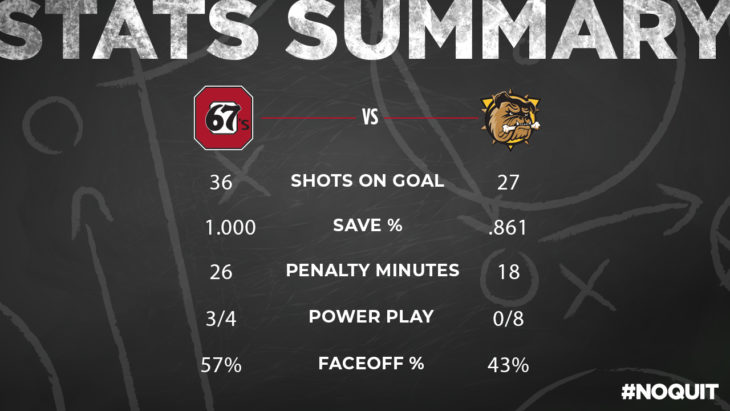