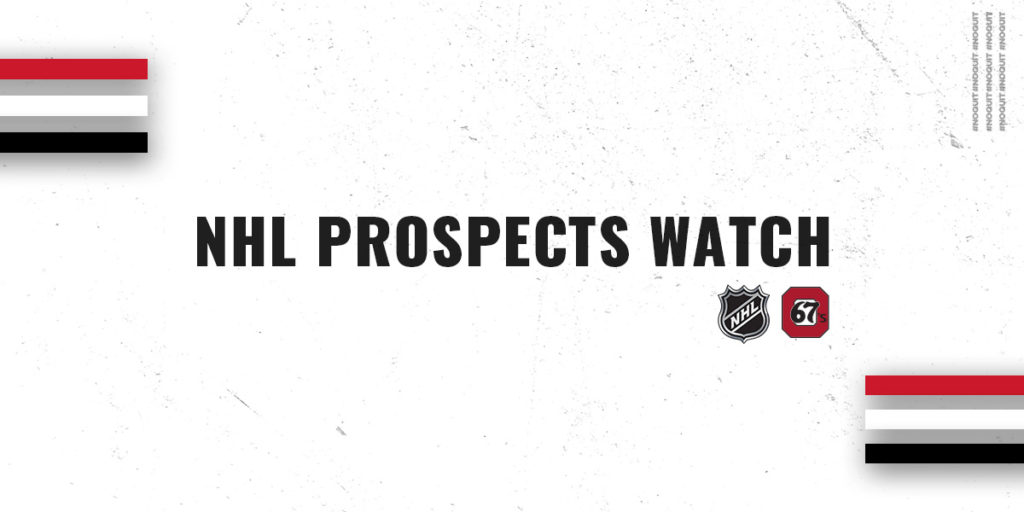 As has become the norm, the Ottawa 67’s will be well-represented at the September NHL Prospect Tournaments.

Drafted in the fourth round, 124th overall, by the Predators in July, Matier is a hulking defender, who rolls into camp at 6’4, and tipping the scales at 200lbs. The Sault Ste. Marie, Ontario native also attended the Predators development camp in mid-August, taking part in intrasquad games with his fellow prospects, before returning to Ottawa for the 67’s main camp. Nashville’s rookie camp officially opens on Thursday, September 16, and will feature three prospect games. Matier and Co. will take on prospects from the Tampa Bay Lightning, Florida Panthers, and Carolina Hurricanes. The full schedule can be found here.

Cranley, who was selected by the Blues in the sixth round of the 2020 draft, makes his way to Traverse City for St. Louis’ rookie camp, with practices beginning on September 14. The 19 year-old is ready to shoulder an increased load in Ottawa this season, if called upon, as he has become the team’s veteran option in net. A native of Peterborough, Ontario, Cranley and the Blues’ rookies will see action against the Toronto Maple Leafs, Detroit Red Wings, and Dallas Stars over the course of the week. Barber Poles fans can find the team’s schedule by clicking here.

A skilled forward from Richmond Hill, Ontario, Beck was a sixth-round pick of the Flames in 2021. In his rookie 17 year-old season with the 67’s, he tallied 19 points in 56 games, and like Matier and Cranley, can expect a substantial role on the team this season, now finding himself as a veteran member of the group. The Flames’ youngsters take to the ice for the first time on September 16, as they get set for two games against their rival Edmonton Oilers prospects. Check the full schedule here.

Throughout the NHL camps, 67’s fans can find updates on all of their favourite players here at Ottawa67s.com, as well as via the team’s social media channels.

The Barber Poles return to preseason action on Saturday, September 18, rolling into Kingston to take on the Frontenacs in a 7:00pm EDT puckdrop.