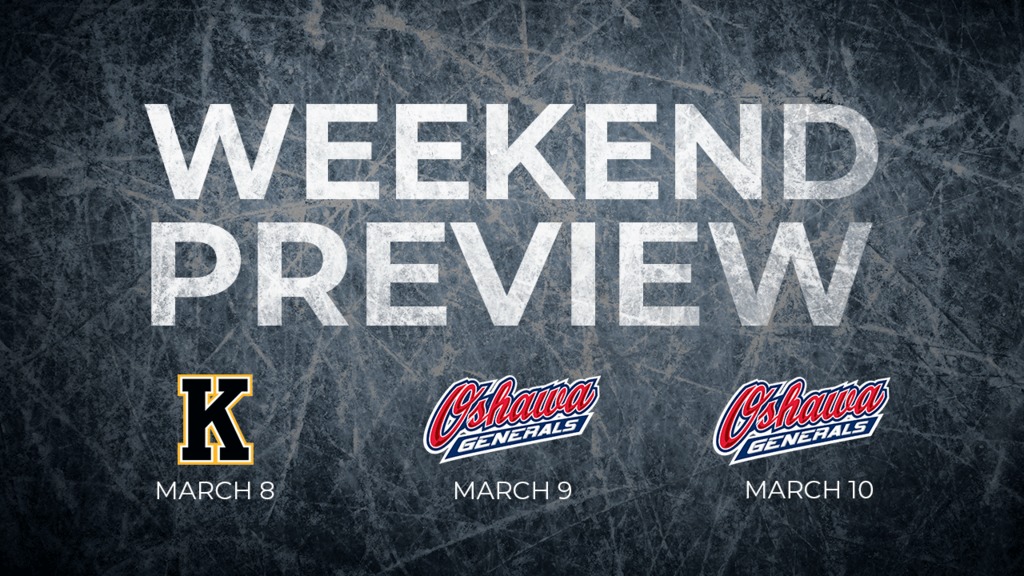 After clinching the East Divison and the Eastern Conference, the Ottawa 67’s now have their eyes set on adding another letter next to their name in the standings, as they look to become the regular season OHL champions.  In order to do so, Ottawa will need to have a big week end, in which they play three games against three Eastern Conference teams.  On Friday, they will be travelling to Kingston to take on the last place team in the East, the Frontenacs.  When you look at the standings, it looks like an almost assured win for the 67’s, but the team has a very fresh memory of the loss they suffered to Kingston back on February 22nd.  That game, the Frontenacs snapped a 15-game losing streak against the top team in the league, surely giving them a much needed boost of confidence.  Ottawa will round out their busy week end with a back to back against Oshawa that will be played at home on Saturday and on the road on Sunday.  The Saturday game will be featured on Sportsnet, with the puck drop set for 3:30 PM.

Having won seven out of their last ten games, the Barber Poles are in fine form as of late.  On an active two-game winning streak, Ottawa will look to make it three as soon as Friday night.  Having shut out the Mississauga Steelheads in the team’s last outing, it is likely that Mikey DiPietro will be getting two out of three starts over the week end, with Cedrick Andree taking care of protecting the net for one out of three.  Whoever Ottawa chooses to be in net for that game, the team believes that the goaltending situation is in good hands, as the two Barber Pole goalies make-up the OHL’s top two goaltenders when it comes to goals against average, on top of both being in the top five for save percentage and shutouts.  Other league-leaders among the 67’s are Tye Felhaber, who leads the league in goals with 56 and is still adding to his season tally.  In this recent stretch of games for Ottawa, scoring has been coming in waves, as all four forwards lines have been getting involved in the team’s offensive game, making the 67’s a very difficult matchup for any team in the league.

Second-worst team in the OHL standings, the 67’s will be the first team to tell you that the Frontenacs are not to be taken lightly, as their loss to Kingston just under two weeks ago is proof of that.  Their 3-2 victory over Ottawa was their only win over André Tourigny’s side all season, as the Barber Poles have taken the other five games that were played against Kingston earlier this season, outscoring them 27-10.  With that recent loss fresh in their memory, the 67’s will be looking for revenge.  If we compare the two team’s offenses this season, it’s been a day and night difference, as Ottawa has scored a total of 267, which is just about double the amount of goals the Frontenacs have scored this season.  Kingston’s top scorer, Ryan Cranford, has put up a total of 38 points this season, which would be good enough to be the 67’s 9th best scorer, tied with Mitch Hoelscher.

Fourth in the Eastern Conference, the Oshawa Generals will be playing a home and home back to back series against their rivals Ottawa, which will be taking place on Saturday in The Arena at TD Place and on Sunday in Oshawa.  This season, these two sides have went head to head six times, with the 67’s coming out as winners four times.  Their two losses were both suffered either in overtime or in a shootout, but the Generals have not been able to beat the Barber Poles in regulation time at all this season.   Three times over the course of the year, Ottawa was able to put up five or more goals in a game against the Generals, which means that Oshawa knows what the 67’s high-powered offense is all about.  However, the Generals are not doing too bad for themselves as of right now, as the team has won eight games out of its last ten.  With three players with 75 points or more on their roster in Brandon Saiegon, Anthony Salinitri and Serron Noel, this is a challenge that will be testing the Barber Poles to see where they are at ahead of the playoffs, and who knows, might this be a potential preview of a playoff round taking place in the near future?  Only time will tell.