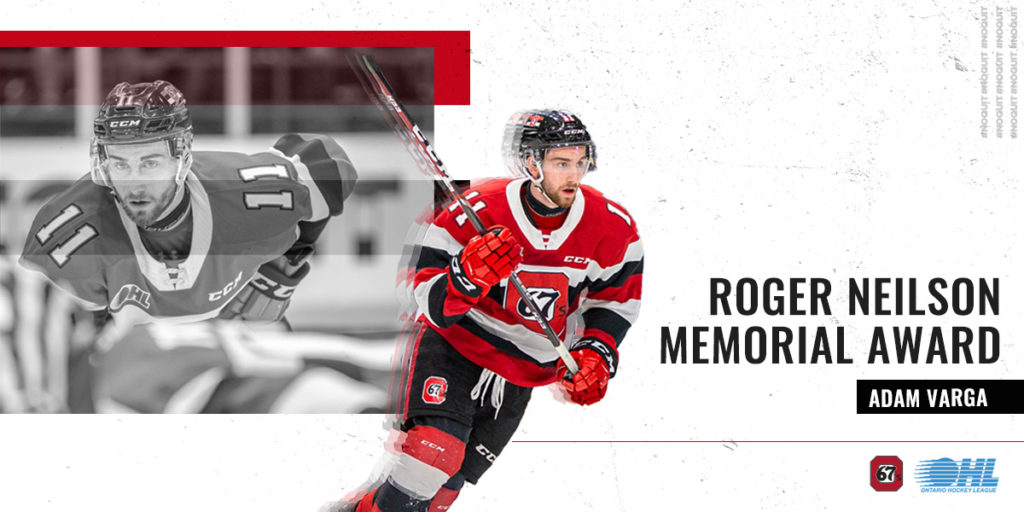 (via the OHL)
The Ontario Hockey League is pleased to announce that Ottawa 67’s forward Adam Varga is the 2020-21 recipient of the Roger Neilson Memorial Award presented annually to the League’s Top Academic Post-Secondary Student.

“It is a huge honour to receive the Roger Neilson Memorial Award,” said Varga. “My family is at the core of my academic success as they have taught me the importance of continuing my education. The Ottawa Sports and Entertainment Group, James Boyd, Jan Egert, and Eileen Duffin have helped me tremendously with all of the support they have given me to succeed. My coaches and teammates have also contributed to this accomplishment as they push me to become a better version of myself on the ice and in the classroom. I am truly grateful to be a part of the Ottawa 67’s organization and look forward to seeing everyone back at TD Place.”

A 19-year-old native of Bel Air, Maryland, Varga appeared in 56 games between the 67’s and Mississauga Steelheads during the 2019-20 season, recording seven goals and four assists for 11 points. A former seventh round (121st overall) pick of the Steelheads in the 2017 OHL Priority Selection, Varga has played in 165 career OHL regular season games, registering 33 points (14-19–33) along the way.

“This year was extremely challenging and is unlike anything that I have ever experienced,” Varga continued. “Not being able to play a season this year was extremely heart-breaking. It has been over a year since our last game played in March of 2020. All of this extra time gave me an opportunity to focus on my education. With the support of OSEG and the 67’s, I was able to take more courses than I normally would during a demanding OHL season. I took advantage of this opportunity and received high marks. Although this year has been difficult, it helped me grow as a person.”

2020 Jim Gregory OHL General Manager of the Year Award recipient James Boyd had high praise for Varga, who persevered through a year of uncertainty.

“Adam is a conscientious student who has fully dedicated himself to the continuation of his studies at the University of Maryland while playing in the OHL,” Boyd stated. “His proactive and diligent approach over the past year has been admirable. The 67’s are extremely proud of Adam being awarded this most prestigious League honour.”

The Roger Neilson Memorial Award is named in honour of the Hall of Fame Coach who served behind the Peterborough Petes bench in the late 1960’s and early 1970’s.  Neilson, a former high school teacher, was a pioneer in stressing the importance of education to all of his players. Varga becomes the third 67’s player to receive the honour following back-to-back recipient Danny Battochio (2005, 2006) while joining Sasha Chmelevski (2019) as the second American-born player to have his name engraved on the trophy.

Finalists for the Roger Neilson Memorial Award include Brendan Kischnick of the Erie Otters and Eric Uba of the Guelph Storm.