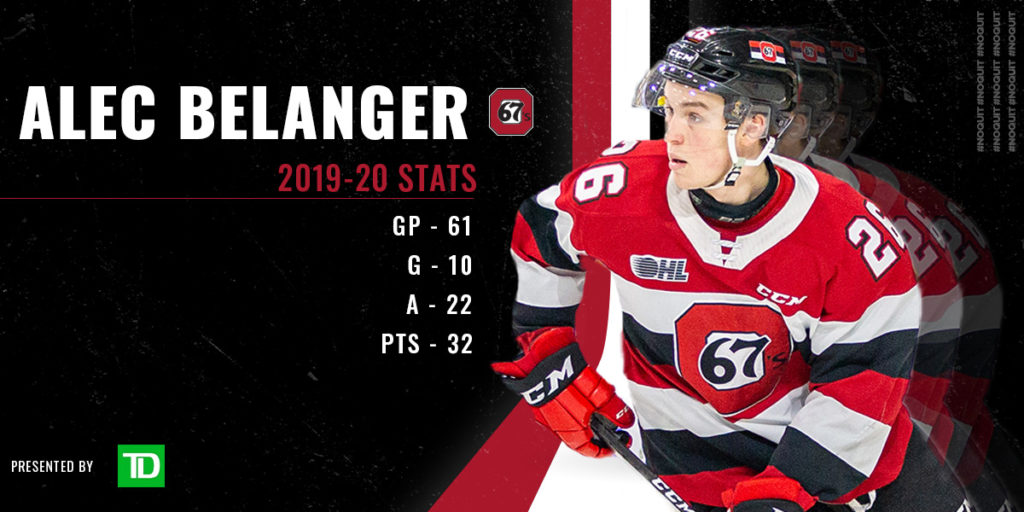 Belanger is one of the most curious cases when it comes to the potential 67’s draftees.  Playing on the wing and at defence during the year, Belanger not only showed of good of a team player he is by taking on any role he was asked to fill by Head Coach Andre Tourigny, but he also showed off his versatility by playing many positions and still managing to quadruple his production from his rookie OHL season (from 8 points to 32 points).  Although Belanger may not be ranked on the NHL’s Central Scouting list, teams have been calling 67’s General Manager James Boyd about him and his chances at hearing his name called on NHL Draft day are very real.

Drafted in the third round, 44th overall by the 67’s in the 2018 OHL Priority Selection Draft, Belanger had put up 46 points in 34 games with the Barrie Colts U16 AAA.  Drafted as a defenceman, Belanger excelled at that position during minor hockey and played the entirety of his rookie OHL season at that position, putting up three goals and five assists for eight points in 27 games.  Splitting time between the 67’s and the Ottawa Jr. Senators of the CCHL last year, with whom he put up four goals and two assists for six points in only fourteen games in the CCHL, Belanger ended the season with the 67’s last year and even saw the ice during the OHL Finals during the playoffs when Kevin Bahl went down due to injury.  As mentioned, Belanger played at the forward position as well this past season, to help out when the team was in injury trouble.  Belanger’s offensive instincts and smooth skating allowed him to succeed at forward, as he even played on a line with NHL top prospect Jack Quinn at times, never looking out of place.  Belanger also played at the point on the power play, as he should for many years to come in the OHL.

Teams looking at Belanger are looking at a young player who is more likely to evolve as a defenceman in the future, but who has definitely shown potential at both positions.  With many defenceman graduating this year from the 67’s program, he’ll be turned to as a player that will have a lot more responsibility as he will be one of the veteran names on Ottawa’s blue line, which will give him plenty of opportunity to evolve as a player under Andre Tourigny and Mario Duhamel’s tutelage.

If Belanger’s name isn’t called on Draft day, it’ll definitely not be the end for him, as he will more than likely then be invited to a teams’ rookie camp, where he will have a chance to impress.  Whatever happens, whichever team does decide to give him a chance, will not only evaluate the quality hockey player he is, but also the quality person and character that he is.  Belanger talks a lot about how much he has learned from now Toronto Marlie Noel Hoefenmayer, and the smooth skating defenceman will look to evolve during the next years of his junior career just like Hoefenmayer did before graduating. 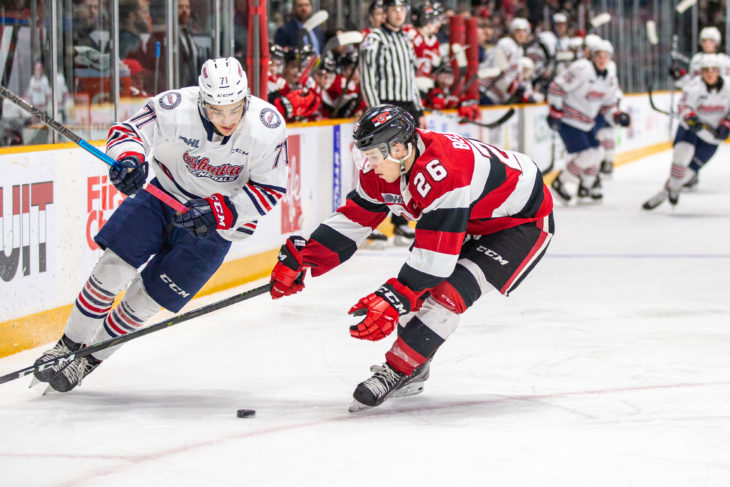