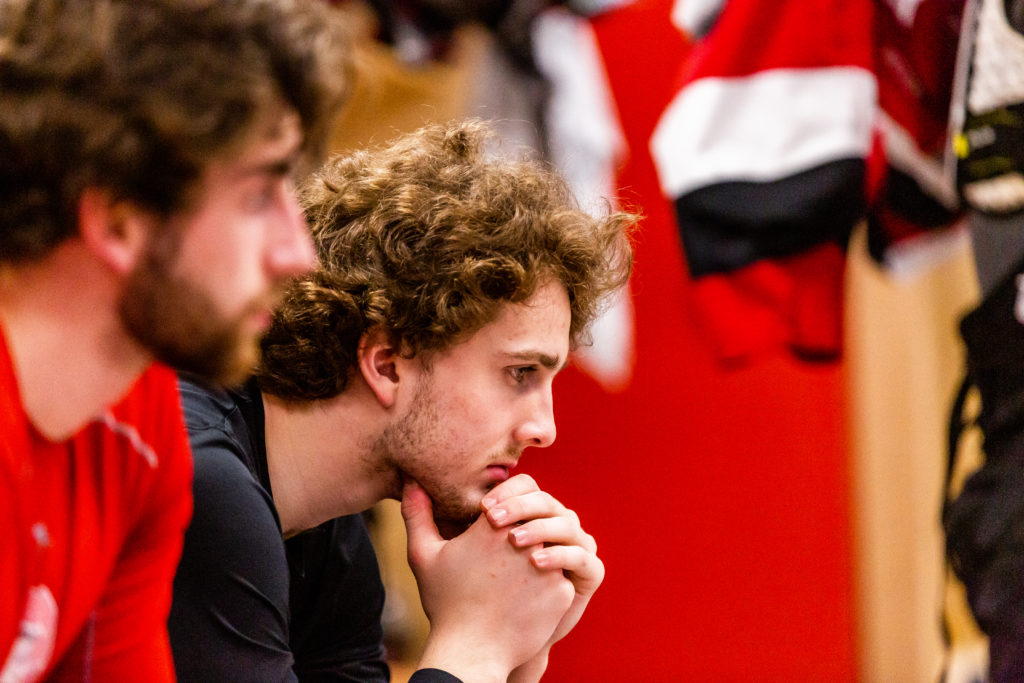 Born and raised in Stittsville, Ontario, the local product was drafted in the sixth round, 118th overall, by the Soo Greyhounds in the 2017 OHL Priority Selection, and spent two years with the Greyhounds, before a pandemic, and a brief stop in British Columbia saw him return home, to the Ottawa 67’s.

Sticking around the capital region, Johnston returned to the Kanata Lasers (CCHL) for the 2017-18 season, after being drafted by the Greyhounds. He scored three goals and 10 assists for 13 points in 59 games.

Johnston made his OHL debut the following year, and immediately got off to a hot start with the Greyhounds. He notched his first career point in his first game, tallying an assist against on the road, against the Saginaw Spirit. In his home debut, just three nights later, Johnston scored the first two goals of his OHL career, as his Hound defeated the North Bay Battalion by a score of 6-0.

On a Soo team that finished third in the Western Conference, Johnston and his teammates earned themselves a first-round matchup with the Owen Sound Attack. He scored his first playoff goal in Game 2, part of a 6-3 win, adding another in Game 3, on top of a goal and an assist in the series-clinching fifth game.

Despite a valiant effort, the Greyhounds fell in six games to the Spirit, in Round 2.

The 2019-20 season ended up as the best of Johnston’s OHL career, as he notched career high’s in all statistical categories. The forward notched 12 goals and 14 assists, good enough for 26 points, in a 64-game season. The Greyhounds failing to qualify for that year’s postseason would prove to be the least of Johnston’s worries, as the onset of the COVID-19 pandemic cut the year short of its conclusion.

With no end in sight to the virus’ spread, the OHL called off the 2020-21 campaign, costing Johnston his penultimate season. Still, he found a way to stay ready.

“I pretty much did nothing but skate and train,” said Johnston in a February interview with Postmedia’s Don Campbell. “It was really tough because when you’re younger in the ‘O’, you’re developing. Then when you’re 19 and 20 you are supposed to have an impact.”

When the league was set to resume for the 2021-22 season, Johnston found himself the victim of a Soo roster that had too many overagers to account for. He then took a brief opportunity with the Nanaimo Clippers (BCHL), appearing in two games, and tallying a goal and an assist.

It wouldn’t take long for Johnston t be called home, though; both to the OHL, and to his hometown of Ottawa.

67’s General Manager James Boyd reached out to Johnston, with the Barber Poles having an open spot for an overager, and in need of depth due to a youthful roster, and a rash of injuries.

After taking some time to ponder his options, Johnston couldn’t pass up the chance to end his OHL career at home, and joined the Barber Poles on December 8, 2021.

“I think for me it was a matter of getting my legs under me. I hadn’t played a regular-season game in 20 months and it just took time.”

True to form, it didn’t take Johnston long to start contributing. He debuted in a 4-3 home win over the Peterborough Petes, chipping in an assist, and followed up with another against the Oshawa Generals, in his second game with the 67’s.

When all was said and done, Johnston proved to be a critical component of the 67’s team that locked down the seventh spot in the Eastern Conference, and secured a playoff berth. He finished his truncated season with 42 appearances, and on the best points pace of his career, with nine goals and 13 assists, for a total of 22 points.

Ottawa found themselves in tough to begin the playoffs, against the North Bay Battalion. Despite the fact that every game could have gone either way, the 67’s found themselves swept, with Johnston recording an assist in Game 2.

Despite the relatively rough end to his junior career, Johnston left an indelible impact on a young 67’s team, and helped to establish the culture that will carry this young core forward.

“Alex embodied the ideals of work ethic, compete, and community spirit,” said Head Coach Dave Cameron. “He served as a great example for our young players.”

As Johnston prepares to take the next step on his hockey journey — with his hometown Carleton Ravens — he too finds himself having gained something from his time with the 67’s.

“My time with the 67s was amazing from start to finish. Playing at home, in front of friends and family, was an experience I’ll cherish forever,” he said. “The 67’s and OSEG are a top notch organization that takes care of all their players. The friendships and memories I made with players and staff is something I’ll never forget.”

“I will always be grateful to James Boyd and Dave Cameron, as well as the whole 67’s organization for giving me the opportunity to finish my OHL career at home. It’s something I grew up dreaming of doing.”