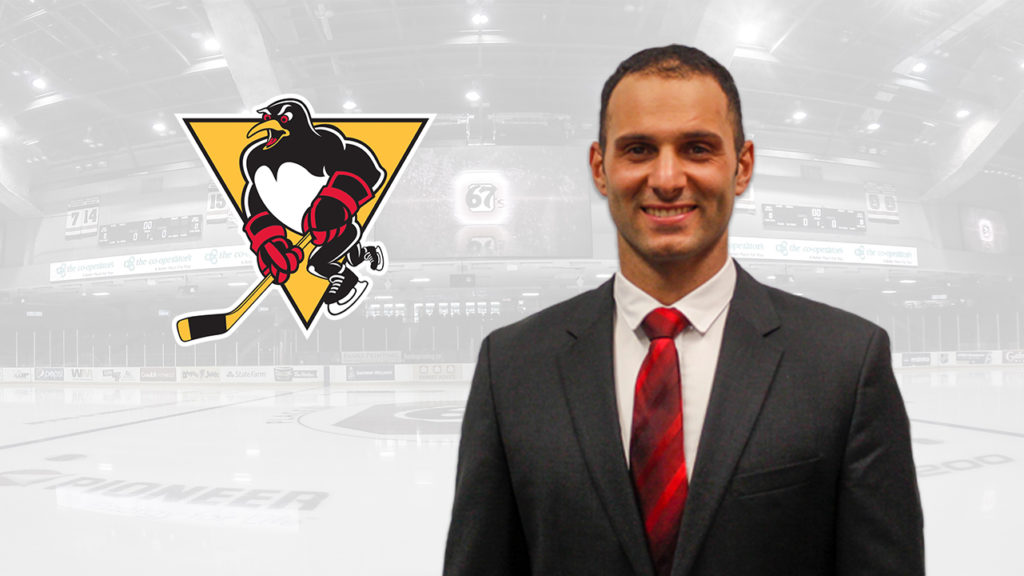 The Ottawa 67’s today bid farewell and good luck to Goaltending Coach Andy Chiodo, who has been hired by the NHL’s Pittsburgh Penguins, the team that drafted him in the 2003 NHL Entry Draft. Chiodo will serve as a goalie development coach with the Penguins AHL affiliate, the Wilkes-Barre/Scranton Penguins.

“It is no surprise that Andy has earned this excellent opportunity in professional hockey,” said 67’s General Manager James Boyd.  “Andy has personality, a great mind for the game and an elite work ethic. The 67s appreciate the time that he devoted to our team and wish Andy the very best as he makes this next step in his career.”

Chiodo joined the 67’s prior to the start of the 2017-18 OHL season as a member of the team’s completely new hockey operations department under Boyd and Head Coach and VP Hockey Operations André Tourigny. “It’s a fantastic news,” said Tourigny. “We want to create the best environment for our players and coaches to develop and having one of our coaches make the jump to professional hockey is positive reinforcement that we’re on the right track.  Andy is a real pro and it was a privilege to work with him. All the best, partner!”

“I’m very grateful to have worked with and learned from André Tourigny and the entire Ottawa 67’s staff,” said Chiodo. “From the ownership right through the entire organization, the 67’s are committed to developing hockey players, developing character and winning. This past season was one of growth and development that I’ll never forget. The 67’s are a team on the rise and their future is bright.”

Prior to joining the 67’s, Andy Chiodo wrapped up a 14-season professional playing career in North America and Europe. The Toronto native played his OHL hockey with the Toronto St. Mike’s Majors and was first drafted by the New York Islanders in the 2001 NHL Entry Draft. The Islanders failed to come to terms with Chiodo and he was drafted a second time in 2003 by the Penguins. In 2003-04, he played 8 games for the Penguins which, at the time, were captained by current Pittsburgh Co-Owner/Chairman, Mario Lemieux.