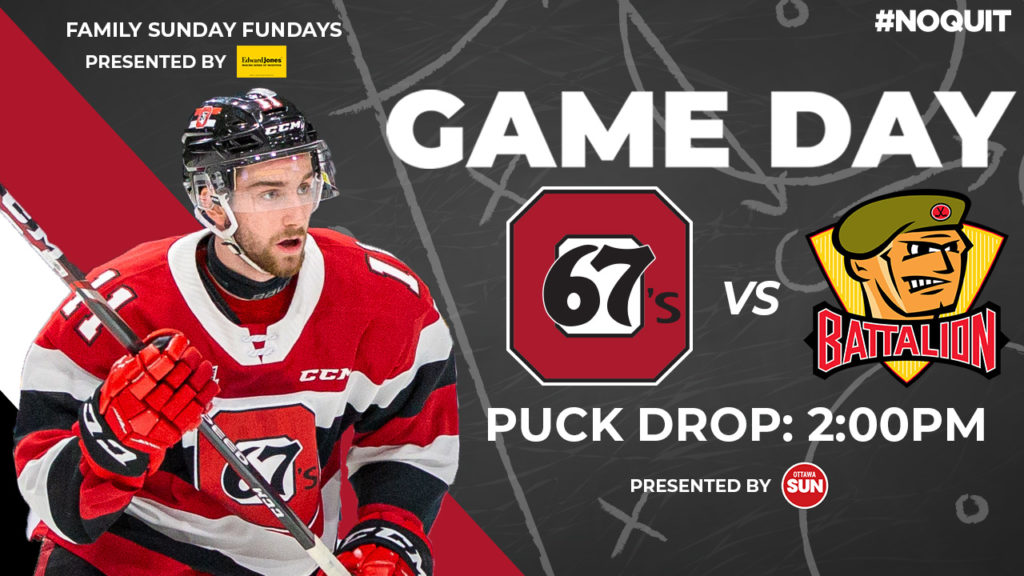 After stretching their six game winning streak to a nine game winning streak over the past week, following a successful three game sequence between Thursday and Sunday, the Ottawa 67’s will look to repeat what they did last week; which is to add three more wins to their impressive record.  Heading into a busy three in three weekend, kicking things off in Hamilton on Friday, before paying a visit to the Peterborough Petes and finally rounding out their busy weekend at home against the North Bay Battalion on Sunday afternoon.

It’s been a difficult season for the Battalion, who are dead last in the OHL standings, but as every good junior hockey fan knows, anything can happen on any given day in this league.  Currently riding a four-game losing streak at the time these lines were written, having only won two of their last ten, it’ll be a team that is determined to get out of a bad funk coming into TD Place on Sunday afternoon, in a game where the 67’s will be coming back from a back to back on the road to finally end their three in three weekend at home.  Among their roster, the Battalion counts on 2017 OHL third overall pick Brandon Coe, who’s been having a decent year with 45 points in 46 games thus far.  2000-born forward Luke Moncada has also been stepping up to the plate in his fourth OHL season, with 27 goals in 48 games.  Finally, local product and rookie Kyle Jackson, who hails from Ottawa, has put up decent numbers as a rookie on a struggling team with 16 points.

More News
0:18
Ottawa 67`s
The team had someone special to read the starting lineups Sunday
17 hours ago