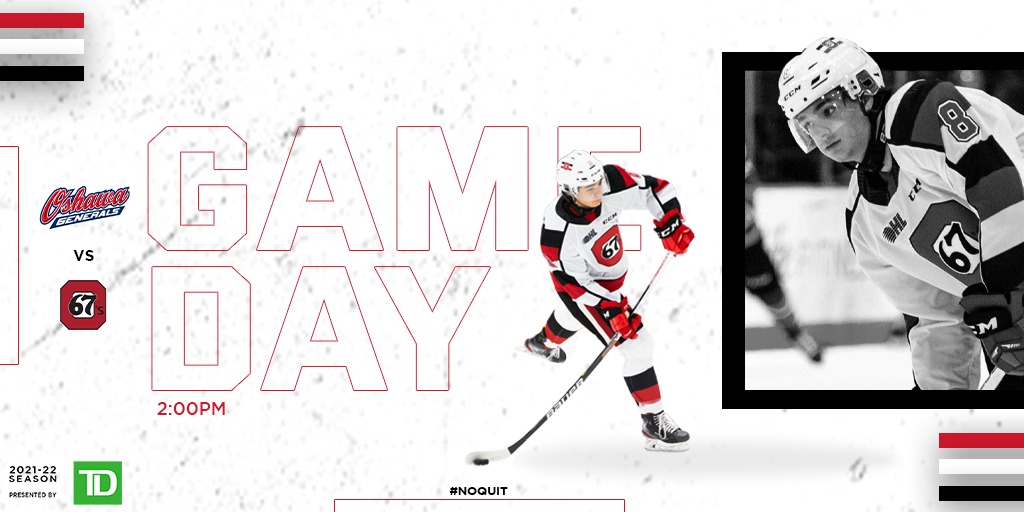 The Ottawa 67’s won their first game of the 2021-2022 regular season, yesterday, over the Kingston Frontenacs by a final score of 3-2. Today, they’ll get the chance to finish off their holiday Homecoming Weekend with a second straight victory, with the Oshawa Generals in town for another 2:00pm EDT puck drop. 67’s fans can listen live on TSN 1200, or watch all the action with a CHL TV subscription.

The 67’s got on the board first, with Vsevolod Gaidamak’s first OHL goal giving them an early lead. Brenden Sirizzotti added another on the powerplay, and Jack Back scored a beautiful game-winner early in the third. Goaltender Will Cranley made 23 saves, and shut Kingston’s late rally down, with the game on the line.

The Generals, meanwhile, are 0-2 on the season. They opened the campaign with a 3-2 loss to the Hamilton Bulldogs on home ice, Saturday, and suffered a 3-2 shootout defeat to the Niagara IceDogs at the Meridian Centre, yesterday. The Gens were powered by an opening goal from Daniel Michaud, and Calum Ritchie’s second of the season. Goaltender Zachary Paputsakis made 25 saves in a losing effort.

There are all kinds of exciting reasons to come out to the rink for Ottawa’s Homecoming Weekend finale, including free t-shirts for the first 1000 fans through the doors. Tickets are still on sale here.