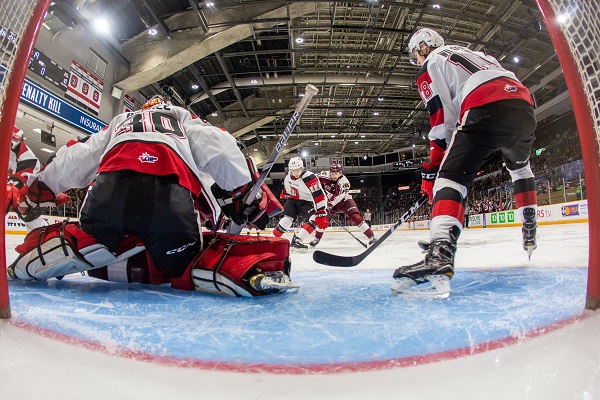 After having started the season with three consecutive wins, all past the 60-minute mark of each and every one of those wins, the Ottawa 67’s suffered their very first defeat of the 2019-2020 calendar in what was their home opener, against the Peterborough Petes. Having beat Guelph and Owen Sound in a shootout and Kingston in overtime, Ottawa was involved in another tight one, a 3-2 loss to the Petes that saw them battle until the very end in front of a crowd of 5,732 faithful fans cheering them on at TD Place.
Veterans have taken the reigns in this start to the season for the Barber Poles, as fifth year players Austen Keating and Noel Hoefenmayer are tied for the team lead in points, with five apiece. It is however 2020 NHL Entry Draft eligible and top-10 hopeful Marco Rossi who has been producing at a great pace, with four points in two games, but Rossi will be out for the entirety of this road trip, serving the final three of a five game suspension.
Cedrick Andree picked up right where he left off last season when he earned 34 wins. Andree has been solid in front of Ottawa’s cage, and we can say the same for second-year goaltender Will Cranley, who looked good in his only start of the season against Kingston, and we could very well see him in action once again over the course of this road trip.

Opponents
Windsor Spitfires (3-1-0-0)
The storied Spitfires franchise had a tougher season last year, going through a rebuilding process, notably trading away decorated goaltender Mikey DiPietro to the 67’s back in early December of 2018. Windsor hasn’t had the start they were hoping for, with two losses to open their season, but they will be a team to watch this year with a lot of offensive firepower, including NHL draft picks Egor Afanasyev (Nasvhille, 2nd round 2019) who was acquired in the DiPietro trade, Curtis Douglas (Dallas, 4th round 2018) and young stars such as Jean Luc Foudy (10th overall pick in 2018 OHL draft) and Will Cuylle (3rd overall pick in 2018 OHL draft).

London Knights (3-2-0-0)
The always powerful London Knights got even more fire power less than a week before the start of the season. Already counting on OHL stars such as Connor McMichael (Washington, 1st round 2019), Liam Foudy (Colombus, 1st round 2018), Antonio Stranges, Jonathan Gruden (Ottawa, 4th round 2018) and Matvey Guskov (Minnesota, 5th round 2019), the London Knight went on and added controversial but talented defenseman Ryan Merkley. The San Jose Sharks 2018 first round pick has already made his presence be felt, by notching five points in his first two games as a Knight. Ranked among Kia’s CHL Power Rankings, London will be a team to watch this season, as they always are.

Kitchener Rangers (1-1-1-1)
A talented group of returning players headline the Kitchener Rangers’ roster this year, who also added one of the league’s better goaltenders in Jacob Ingham, as well as a highly-touted overage player in Liam Hawel. Ottawa native Greg Meireles could be one of the OHL’s top scoring players after he put up an impressive 97 points last year. The addition of Hawel could really bolster their offense and Dallas Stars’ 2018 fifth rounder Riley Damiani could add to his 85-point total from last year. On the defensive side of the ice, 2020-NHL draft eligible Donovan Sebrango could be an interesting case to follow, but the Rangers’ leader on the back end will undoubtedly be New Jersey Devils 2019 third rounder, Michael Vukojevic.

Game Notes
– Ottawa defenseman Noel Hoefenmayer has put up at least one point in each of the four games Ottawa has played so far this year. He currently totals at 5 (1G-4A)

– 67’s home opener against Peterborough was the very time this season that a Barber Poles game was limited to 60 minutes.

– A player to watch out for when the 67’s take on the London Knights will be forward Connor McMichael, who was named OHL Player of the Week for the opening week of action. McMichael was able to put up 10 points in four games last since the start of the season.

– The 67’s will meet a familiar face when they take on the Spitfires on Thursday. Matt Maggio, who spent his rookie-season last year with the 67’s, was traded to his hometown team over the summer.