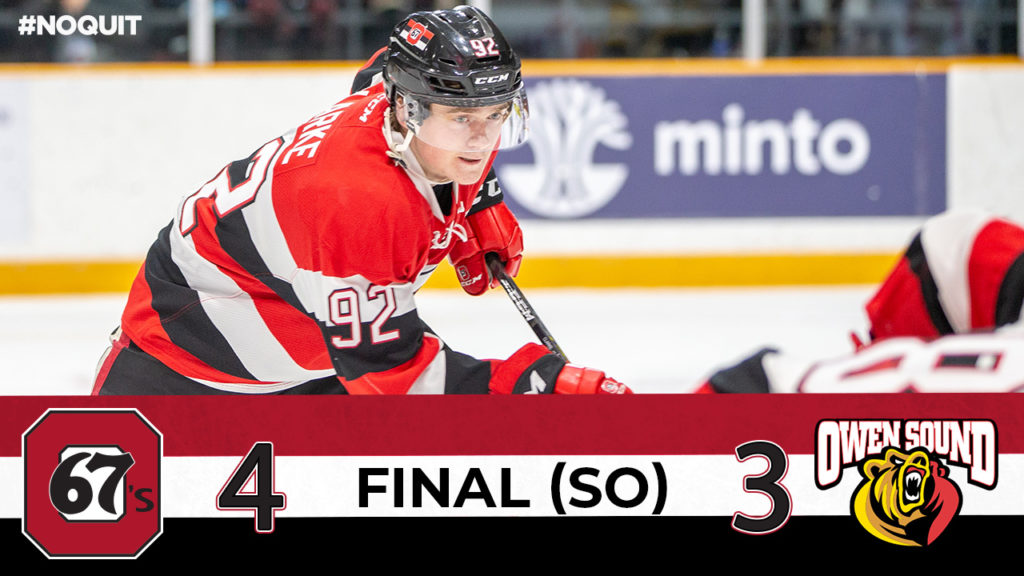 The Barber Poles were on the back half of a back to back on the road Saturday night, as they took on the Owen Sound attack after defeating the Guelph Storm by a score of 3-2 in a shootout, kicking the 2019-2020 regular season with a very exciting game.  Ottawa tried to follow that up the very next day against Owen Sound, looking to come back home with a perfect record on the week-end.

Just like in their opening game on Friday night, the 67’s allowed the first goal, when Stepan Machacek initiated scoring in those one with a shot from a tight angle that touched a few sticks and skates before trickling past Cedrick Andree.

Ottawa’s Marco Rossi leveled things up with his second goal in as many games on a two-man advantage, finishing off a nice play set up by Noel Hoefenmayer and Austen Keating.  Ex-67’s defenseman Carter Robertson went on to give the Attack their second lead of the game when he capitalized on a breakaway as he was just coming out of the penalty box.  It took about three and a half minutes for the Barber Poles to tie the game once again, when Keating found the back of the net for the first goal of his fifth OHL campaign.  Both teams headed to the locker rooms tied at two apiece after forty minutes.

The Attack re-claimed their lead halfway through the third and final frame when Daylon Groulx scored on the power-play to give his team a 3-2 edge.  The no quit Ottawa 67’s lived up to their mantra through the full 60 minutes as they tied things up for the third time, as Graeme Clarke scored his first of the season in order to tie things up and send things to overtime, making it two days in a row with extra time being necessary to decide a winner for Ottawa.

Once again, a shootout was necessary.  This time around, Marco Rossi and Graeme Clarke both beat Owen Sound’s Mack Guzda, while Cedrick Andree stood tall again to give the 67’s the win.  Ottawa picked up four points out of a possible four in this opening week-end of OHL action, a statement for Andre Tourigny’s squad that they are back for more in 2019-20.

The 67’s home opener will take place on Sunday, September 29th in The Arena at TD Place when they host the Peterborough Petes at 2 p.m. Tickets are available here.