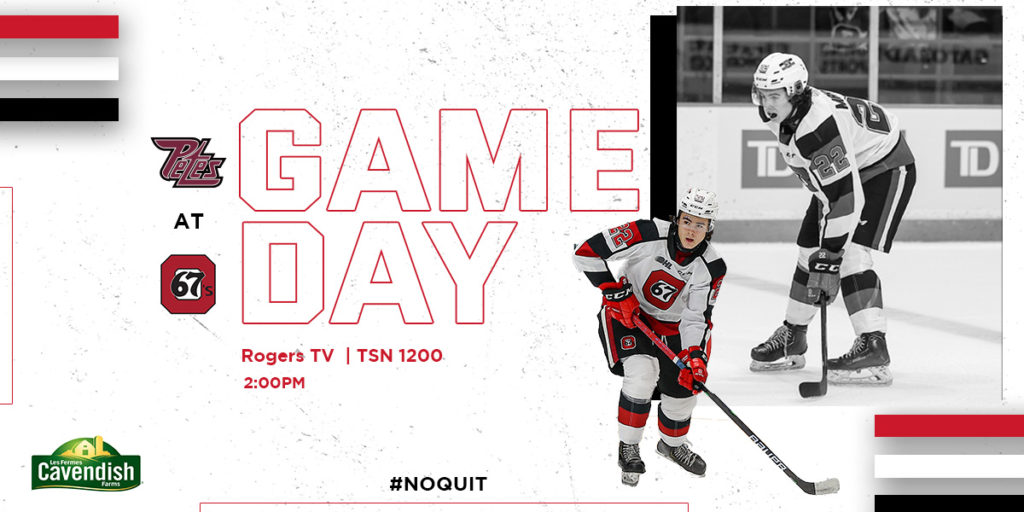 The Ottawa 67’s (10-7-1) are looking to get back in the win column, with the Peterborough Petes (5-10-1) coming to town this afternoon. Puck drop is set for 2:00pm EST, and Barber Poles fans can catch all the action on Rogers TV. As always, Kenny Walls has the radio call on TSN1200.

Ottawa has lost two straight, most recently falling to the Sudbury Wolves on the road, Friday night. Derek Smyth scored his first OHL goal, and Cam Tolnai made it a game in the third, but a depleted 67’s team — missing Jack Beck, Adam Varga, Thomas Johnston, and Ranvir Gill-Shane — were doubled up by a final score of 4-2.
The Petes were also beaten on the road two nights ago, dropping a 5-3 decision to the Kingston Frontenacs. J.R. Avon scored twice, and Nick Lardis had the other, but three wouldn’t be enough for Peterborough, on this night.
were doubled up by a final score of 4-2.

This is the second meeting between these two teams on the season. In Ottawa, on November 5, the 67’s rode a four-goal third period — boosted by a five-minute powerplay — to a 6-3 victory. Beck, and Brenden Sirizzotti had two apiece, while Vsevolod Gaidamak and Jack Matier scored the others.

Jack Matier is tied for fourth in scoring among defenceman, with 11 points. Anthony Costantini is tied for fifth, with 10.