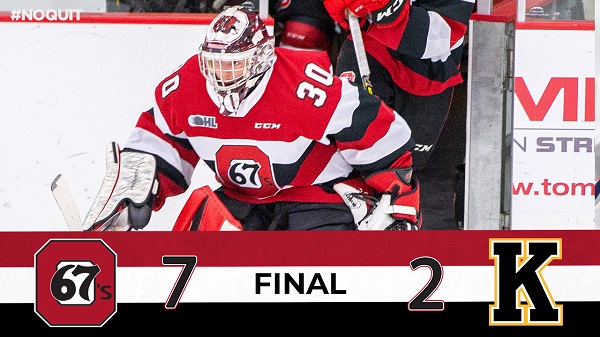 The Ottawa 67’s stretched their active winning streak to twelve consecutive games on Saturday night in Kingston, as the team got back to action following a short holiday break on the road.  Ottawa picked up right where they left off before the break with yet another win, as they scored six unanswered goals in the second and third periods to secure the victory.  Adam Varga (2), Marco Rossi (2), Jack Quinn, Jack Beck and Joseph Garreffa were the goal scorers for the 67’s in the winning effort.

Despite the final score of 7-2 in favour of Ottawa, it was the Frontenacs who struck first, as Jordan Frasca scored the lone goal of the first period for the hosts, who kept Cedrick Andree busy with 10 shots during the first 20 minutes.

Ottawa’s Adam Varga tied things up just about two minutes into the second, before Shane Wright re-gave Kingston the lead by jamming a loose puck in front three minutes later.  After the 15-year old Wright’s goal, the floodgates opened for the 67’s, who would go on to score six unanswered from that point on until the end of the game, including four in the second period, coming from the sticks of Marco Rossi (twice), Varga once again and rookie Jack Beck, who was the overtime hero last game just before heading in the break.

Coming into the third period with a 5-2 lead, the 67’s didn’t sit on their lead, but rather added to it.  Jack Quinn tallied another highlight reel goal on the season halfway through the final frame with a beautiful deke on a brekaway, beating the home team’s netminder for his 20th of the season, the first time he reaches that milestone in his OHL career.  Overage forward Joey Garreffa scored the 67’s seventh and final goal of the hockey game later on, making it 18 on the year for him.  Ottawa’s monster second period allows them to come home on Sunday riding a twelve game winning streak.

The Barber Poles will look to make it thirteen in a row as soon as Sunday afternoon at 2:00 PM inside The Arena at TD Place, when they host the Peterborough Petes for their Ugly Christmas Sweater game.