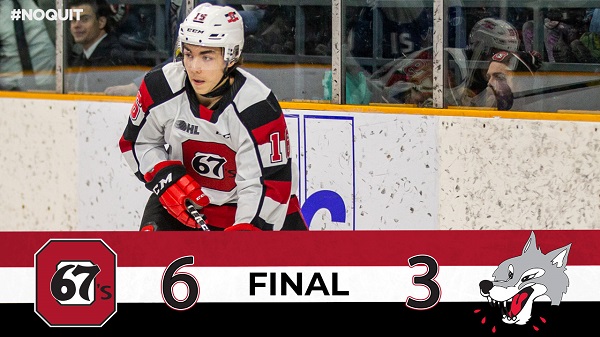 The Ottawa 67’s had an early start on Thursday morning, in a game where they defeated the Sudbury Wolves by a score of 6-3, scoring four goals in the final period.  Jack Quinn scored twice, while Kevin Bahl, Marco Rossi, Yanic Crete and Mitch Hoelscher were the other goal scorers for Ottawa.

Sudbury struck first, five minutes into the game, before adding a second goal before the 15-minute mark of the other periods, their goalscorers being Macauley Carson and Chase Stillman.  Jack Quinn would however cut the Wolves’ lead in half with three minutes remaining in the period.

Both teams traded a goal each in the second, as Shane Bulitka made it 3-1 for the Wolves with a goal on the power play, before Jack Quinn added his second with a beauty, making things interesting heading into the third with a 3-2 lead for the visitors.

The third period, as we are used to seeing, was all Ottawa.  Kevin Bahl, Marco Rossi, Yanic Crete all found the back of the net, before Mitch Hoelscher tipped a puck in an empty net to make it a 6-3 game after the Wolves had pulled their goalie for an extra attacker.

The 67’s will come back to play in front of their own fans inside The Arena at TD Place as soon as Saturday, as the nation will also be watching from the comfort of their own homes as this game will be nationally televised on Sportsnet as soon as 3:30 PM, when the Mississauga Steelheads will be in for a visit.

“It was really loud.  I think it was a huge game as well, Sudbury is a really tough opponent and I think we reacted well in the second half of the game.  We were playing fast, making plays and we were tough to play against.  We did a really good job, the leadership did a great job at rallying the troops and having a strong finish.”

“I think it was a good measuring stick kind of game.  Sudbury is a good team and they’re right up there in the standings, but I knew that if we were to play a good game like that we could take it to them, it was a good battle and we’re happy with the result.”

Rossi’s assist on Kevin Bahl’s goal was his 100th point in the OHL, in only 70 games total.