Barbers Poles battle back to defeat Olympiques in OT 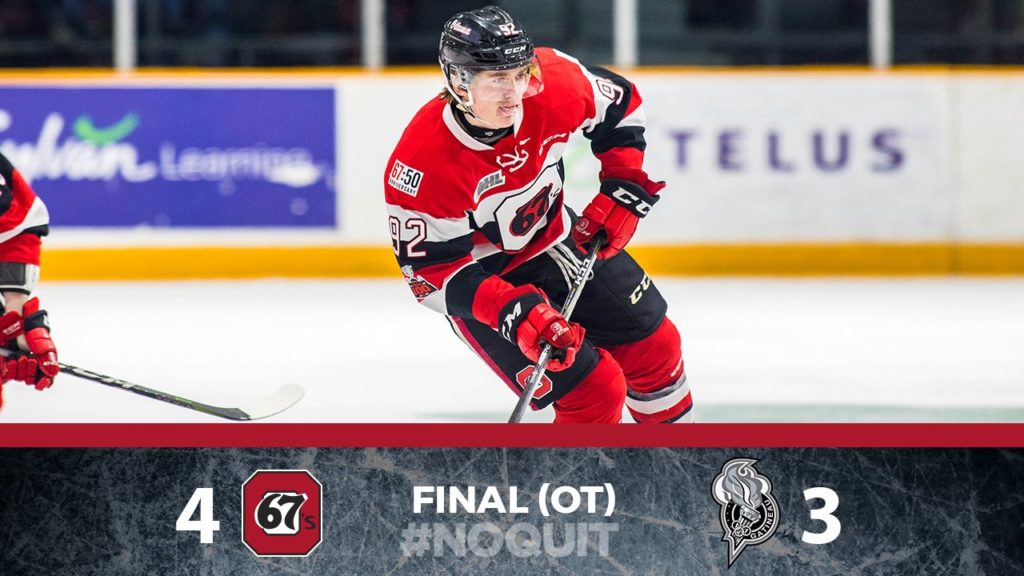 The Ottawa 67’s lived up to the club’s #NoQuit slogan on Friday night as they came from behind to best the Gatineau Olympiques 4-3 in overtime.

The 67’s didn’t take the lead in this one until Austen Keating notched the winner in the extra frame, while Sam Bitten, William Sir man and Quinn Yule scored in regulations.

Metis Roelens, Kieran Craig and Charles-Antoine Roy found the back of the net for the host Olympiques.

The first period was a tight one, with the Olympiques gaining the edge towards the end of the period. A Metis Roelens shot trickled past Will Cranley to find the back of the net with a little over a minute left in the period. Thing also got chippy towards the end of the opening twenty, with Hudson Wilson coming to the defense of his teammate after a questionable hit.

It didn’t take very long for the 67’s to tie it up in the middle frame, as Bitten buried a rebound with just about two minutes played in the second period. Kieran Craig however gave the lead back to Gatineau with a quick answer, only a minute and a half later.

The Barber Poles came into the third period immediately looking to tie it up, with the newly acquired Will Sirman doing just that three minutes into the period. Gatineau would answer back less than two minutes later, with Charles-Antoine Roy finding the back of the net for the hosts. During the final minutes of the game, Quinn Yule ripped a good wrist shot past Élie Bérubé, allowing the 67’s to tie things up and send the game to overtime.

Keating clinched the game after being set-up by a nice pass coming from the stick of Lucas Peric following a Gatineau turnover.

For Head Coach André Tourigny loved his team’s fight in this one.

“We could see it coming. Whenever we went down, we always came back and the spirits were up on the bench, we had a pretty good feeling,” said Tourigny.

The 67’s will face the Olympiques once again on Sunday at Ray Friel Arena in their final pre-season game.

The Barber Poles’ season opener will take place at home, as they will host the Mississauga Steelheads on Friday, September 21 at TD Place.