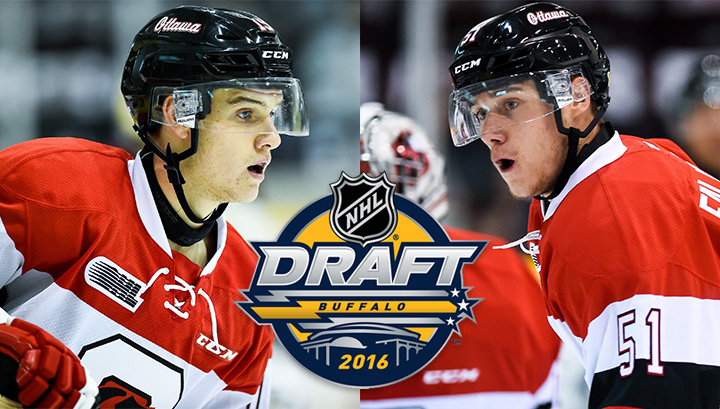 Two members of the Ottawa 67’s had their dream of reaching the NHL realized Saturday in Buffalo, NY as defenceman Stepan Falkovsky and forward Travis Barron were both selected in the 7th round of the 2016 NHL Draft.

Falkovsky was selected 186th overall by the Calgary Flames and five picks later Barron was chosen by the Colorado Avalanche at 191st overall.

With the 186th pick, the #Flames have selected defenceman Stepan Falkovsky from the @Ottawa67sHockey!

Falkovsky, a 6’7″ defenceman notched nine goals and 23 assists with the 67’s in his first OHL season. Flames GM Brad Treliving had high praise for the big Belarusian.

“We have been talking about him for a while and talked a lot about him in the 6th round. He’s big and at 6’7″ he has mobility too. He’s raw and is going to need time and work, but we are excited to get him.”

67’s Head Coach and GM Jeff Brown, who was at the NHL Draft, praised Falkovsky’s game.

“He’s come along way already, he can skate and is a big puck moving defenceman who can be a good player in the NHL.”

Barron, seen by many scouts heading into the draft as an excellent two-way player, was very happy to see his dream of being drafted into the NHL become a reality on Day 2 of the Draft.

“It’s a dream come true. You grow up dreaming of this day and I’m proud to be part of Colorado.”

In two seasons in the Nation’s Capital, Barron has 25 goals and 33 assists.

Jeff Brown believes that Colorado have scored themselves something special.

“I am really excited and proud for him. He’s going to prove a lot of people wrong,” said Brown. “He can do it all. He doesn’t have any weaknesses and you can put him in any situation. He has a strong character and is a leader.”

“We are excited to have him. He works hard and is a two-way player,” said Sakic. “We know he does everything well – he’s got a good character, works hard, is consistent and brings that element that you know what your going to get every night.”

It was also a big weekend for 67’s head coach and GM Jeff Brown who was on hand to see his son Logan drafted in the 1st round, 11th overall, by the Ottawa Senators.

Logan Brown speaks to media after being selected 11th overall by the #Sens. #SensDrafthttps://t.co/5Qsd4asYK1

Earlier this week the 67’s unveiled their 68-game schedule. CLICK HERE for the complete 2016-17 Ottawa 67’s schedule. Ticket information on the 34-game home calendar will be released soon.