the Battle of the Ottawa River – Game 2 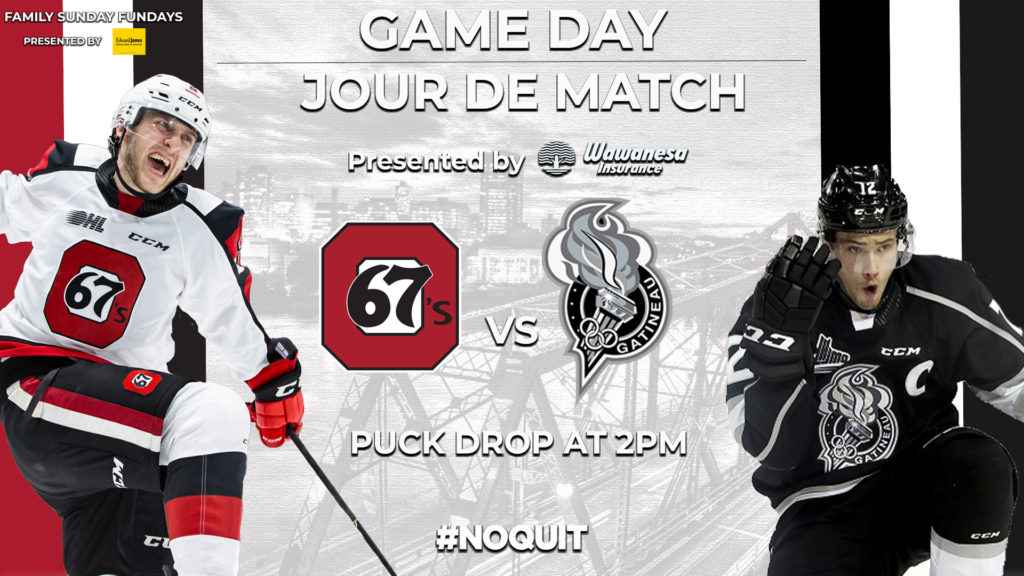 It’s not every day that two teams from different CHL leagues go head to head against one-another.  As a matter of fact, it only happens twice a year, when the Ottawa 67’s and the Gatineau Olympiques face off in December for the second edition of the Battle of the Ottawa River.  At stake will be bragging rights for the winning team’s league for a full year, bragging rights as the top team in the Ottawa/Gatineau region, as well as a trophy that was put on the line for the first time ever last season; the Alexandra Cup.

To remind everyone how this home and home series works, a winner is crowned immediately if they win both games of this series.  However, in a case like last year’s, if both teams split a win each, the winner will be decided by on an aggregate score of both games combined.  Last year, after dropping the first game of the series (which also snapped a 23-game undefeated in regulation time streak) by a score of 2-1 in Gatineau, the 67’s went on to win 5-1 the very next day, making it a final score of 6-3 on aggregate in favour of the Barber Poles.

“These are not like any other types of games in the CHL, playing against a team from another league.  There’s always a little bit of bad blood between us, there’s obviously some mutual respect for each other too, but on the ice, we’re going to leave it all out there”, said 67’s defenseman Alec Belanger.

Fans will also remember two years ago, when the two sides had their memorable outdoor game, in which the Olympiques came out winners by a score of 4-1.  This was the first time in 15 years that the two sides went up against each other, as the rivalry from back in the day was now re-ignited.  The outcome goes beyond the Alexandra Cup, as both games will count as regular season games on each team’s respective schedules and will each have two points up for grabs in their league’s standings during both games.

“It’s always fun to play a QMJHL team, especially as they’re only just across the river.  We’re playing an away game, but it’s only half an hour away and in a completely different league, it’s pretty cool, especially for the fans,” said 67’s goaltender Cedrick Andree.

Looking at both leagues’ overall standings, it’s pretty apparent that one team has had a better start to the season than usual.  Second last in the QMJHL with a record of 7-17-3-0, the Olympiques have been struggling.  Currently on a six-game losing streak, Gatineau will be looking to bounce back in a big way and to get back into the win column against one of the top, if not the top team in the OHL in the 67’s, who currently have a record of 20-6-0-0 and are riding a seven game win streak.

“It’s really cool, especially for the fans.  No matter where the teams are in the standings, high or low, both teams always show up.  For this game, you can’t really look at the standings because you know it’s going to be a challenge anyways.  It’s always fun the crowd are always rowdy and it’s always fun to play those games,” added Andree.

Andree and Belanger were two members of last years’ edition of the 67’s who ended up lifting the Alexandra Cup as the first team to ever do so.  For others, however, this will be the very first time playing a regular season game against a team from another league, which will be the case for fifth year OHL veteran and first year 67, Joe Garreffa.

“You never really get these kinds of games against a team from another league. Except if you play in the Memorial Cup, you don’t get to play against the other leagues, so having the opportunity to play against Gatineau, I think it’s pretty cool, I’m excited.  The guys told me that these games are intense and pretty tough, that both teams’ barns are rocking, so it’s going to be a good time and I can’t wait,” said an excited Joey G.

Not only are the players excited for these games, but that remains the case for 67’s Head Coach André Tourigny, who served as a Head Coach in the “Q” for a total of eleven seasons; ten with the Rouyn Noranda Huskies and one with the Halifax Mooseheads.

“I think these games are really good for us because they mean something.  For sure it’s a rivalry game, but in a long season of 68 games, adding these type of games where there is some spice and desire to win because we’re playing for something that means to a lot of people in Ontario and Quebec, it’s not a war, but it’ll be a great battle,” said Tourigny.  “It’s great to play this kind of game, especially at this time of the year.  You want to see your team play with emotion, you want to see them play games that mean something and have the desire to win on that level.  Those are the kinds of games where you learn the most about your team.”