Behind the 67’s Pride jersey 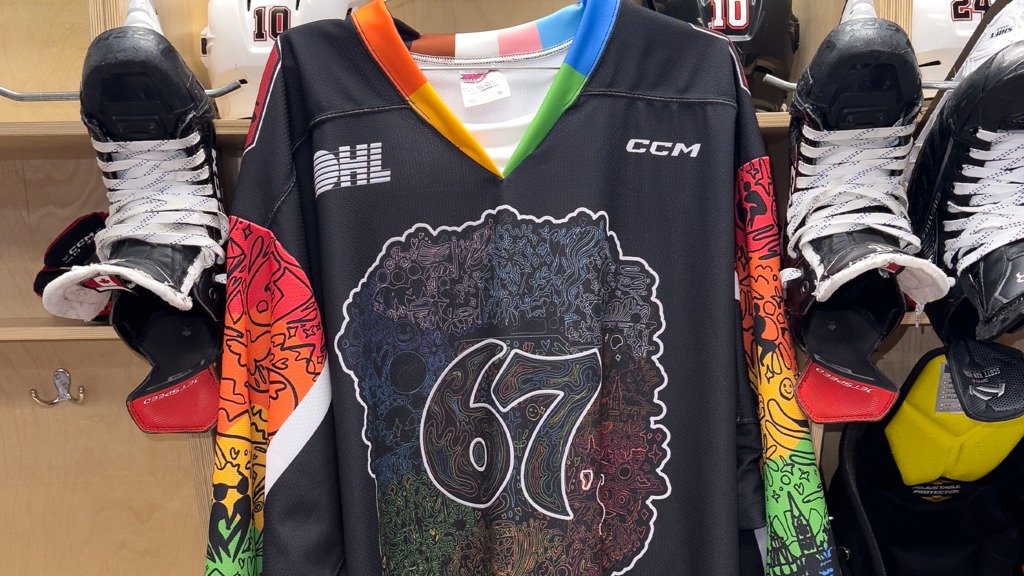 Mio Linzie has already made her mark in the hockey world, creating art pieces that have graced the front of jerseys and merchandise in various leagues, including the NHL and PHF. On Friday, January 27th, when the 67’s welcome the London Knights to The Arena at TD Place, Linzie’s work will be on full display, as the Barber Poles take to the ice in their Pride jerseys.

Linzie was the brains behind the Vancouver Canucks Pride warmup jersey earlier this season. Her designs have become renowned for their intricacies, and it won’t be any different this time. While keeping some of the traditional elements of the 67’s jerseys, she creatively, and elegantly, breaks moulds – and hopefully, some barriers.

The black base of the jersey sets the tone, but it’s the rest of the colours that steal the show. Linzie says that every colour was picked with intention, all to promote inclusivity, and to make everyone feel welcome.

“I like to work with intersectional Pride flags,” Linzie said. “Obviously, the older Pride flags aren’t meant to exclude anyone, but the intersectional flag stands out more, which I think is great in the hockey community. Some people seeing the jersey may not be educated on the [LQBTQ+] community, and I think this makes it more clear that it’s meant to represent everybody.”

While each colour on the Pride flag has its own meaning, Linzie wanted to connect them to the city and its people in slightly different ways. She used green to represent the forests in Ottawa and its surrounding areas, and use blue to represent snow, ice, and elements relevant to the sport. But those colours also hold a deeper meaning, one harkening back to different times.

“The colours of the Pride flag are modified slightly, to give more of a pastel or retro design, reminiscent of the ‘60s and ‘70s,” Linzie said.

In both Canada and the U.S.A., the gay rights movement began in the 1960s, with some progress being made late in the decade, and early in the 1970s. While larger progress wasn’t made until the early 2000s (including the legalization of gay marriage), the “pastel” design is a subtle nod to the people who started it all.

The design process began with the logo. After seeing the regular crest, Linzie thought about ways to make it look more natural and alive, ultimately deciding that the design should be allowed to break the traditional borders of the square ‘O,’ saying that it would add interest and “lively motion.”

That it did, with a more flower-like and intricate outer box. But once again, there’s a deeper meaning, serving as a commentary on life in the LGBTQ+ community.

“It’s not stuck in a box,” Linzie said. “It can be out and explore, it’s a metaphor for the queer community. I wanted it to feel like that.”

Inside the crest, little doodles and sketches can be seen, with each colour representing something different. Yellow is for home, with Ottawa at the forefront, orange includes birds and mountains, while green encapsulates other elements found in nature. Those small designs continue on the sleeves, overlaid on the barber pole stripes fans have become accustomed to seeing on the 67’s jersey.

“I wanted it to have a school kid’s sketchbook [feel],” Linzie said. “It borrows designs from the crest, and makes a collage on the sleeves.”

Linzie has seen her work all over the hockey world to date, but this marks the first time she has ever designed a full jersey. So far, she has only seen the digital version, but excitement is bubbling up about seeing them on the ice, even though she’s nervous about the small things, as any artist would be.

Replica jerseys will be available for sale at Lansdowne Sports.