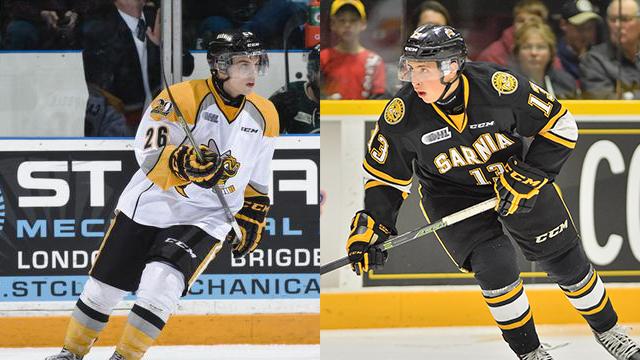 The Ottawa 67’s today announced a blockbuster trade that positions the team to rapidly grow to championship caliber and remain a top contender for years to come.

The 67’s will also receive two additional second-round draft picks from the Sting if Konecney, a Philadelphia Flyers top-prospect, returns to the OHL next season.

“Travis is a great player and a great leader and as hard as it is to let him go, the fact is we received an offer we couldn’t refuse that will accelerate the process of building a championship team here in Ottawa,” said 67’s Head Coach and General Manager Jeff Brown.

“It’s also a great opportunity for Travis and Sam to join a very strong club in Sarnia and help them try to win a Memorial Cup. In Chmelevski and Campbell, we have two young players with tremendous upside who can step into our lineup and contribute right away. I think the draft picks speak for themselves. We’re now in great shape for the future. ”

Chmelevski, a 16-year old rookie born in Northville, Michigan was selected in the 1st round, 10th overall by the Sting in the 2015 OHL Priority Selection Draft. He scored 9 goals and recorded 17 points in 29 games for Sarnia in the first half of this season. The 5’ 11” right hand shot was also a member of Team USA at the 2015 World Under-17 Hockey Challenge tournament last November.

A smooth skater and strong two-way player, 17-year old Campbell, the Sting’s 3rd round pick (55th overall) in the 2014 draft, has seen limited playing time this season. The 5’ 8” right hand shot has 2 goals in 16 games, primarily in a checking role. Prior to joining the Sting Campbell recorded 72 points in 31 games in his final season with the AAA Minor Midget Waterloo Wolves.

Both Campbell and Chmelevski are expected to be in the lineup this Friday when the 67’s host the Peterborough Petes at TD Place.

During his stay in Ottawa, 18-year old Travis Konecney established himself as one of the top players in the OHL. Drafted first-overall by the 67’s in the 2013 draft, Konecney scored 52 goals and recorded 183 points in 152 games.

Playing for Team Canada at the World Junior Hockey Championship earlier this month, Konecney’s speed and tenacity earned him global recognition as an impact player, despite limited ice time. The Philadelphia Flyers selected Konecney in the first-round of last June’s NHL Entry Draft.

20-year old Sam Studnicka was one of 4 overage players on the 67’s roster. His strong work ethic and skill level earned him 16 goals and 26 points in 31 games this season.

“We thank Travis and Sam for their service in Ottawa and wish them well in the future,” said Brown.

The draft picks acquired by the 67’s in the trade break down as follows:

The two conditional second round picks, should Konecny return to the OHL next season, would be in 2021 and 2022.

The 67’s make the first appearance at home of 2016 on Friday, January 8 against the Peterborough Petes at 7 p.m. followed by a 1 p.m. Saturday matinee against the Mississauga Steelheads at TD Place.