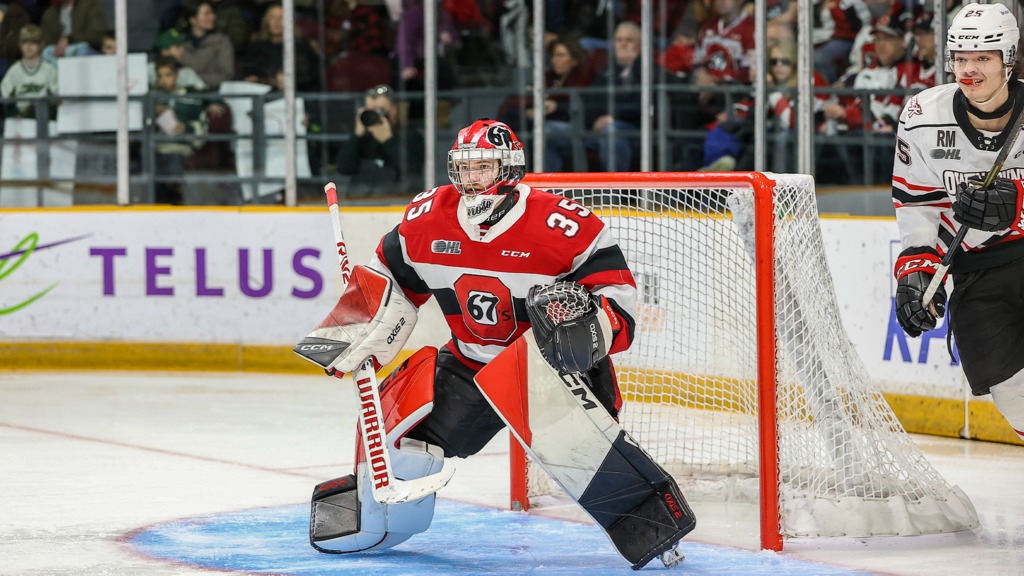 Whether it’s in the crease, or thousands of feet in the sky, Ottawa 67’s goaltender, Max Donoso is required to stay calm, even in the most challenging situations.

While away from the rink during the COVID-19 pandemic, Donoso’s hockey dreams were put on pause, giving him an opportunity to think about life after hockey. Although he hopes there is still plenty of hockey ahead of him, the Windsor native took the chance to heart, and started building his next career, beginning the process of becoming a pilot.

“We were off the ice for a long time,” Donoso said. “I had to think of plan ‘B’, and I love planes, always have since I was a little kid, and I thought I would love to fly. I knew nothing about it, but I watched a bunch of ‘day in the life of a pilot’ videos on YouTube, and I loved it.”

That passion for planes has been around for as long as he can remember. Donoso’s family would routinely take trips annually, but he wasn’t looking forward to the destination, but rather the travel. While so many people find the airport and the subsequent flight the most stressful part of the vacation, Donoso loved it, furthering his interest in aviation.

He recalls that his Grandmother would often poke fun at him for this, wondering how the flight could be the best part of a trip. But Donoso’s young self didn’t change his mind, he was absolutely enthralled.

In recent times, Donoso has accrued more than 50 hours in the air, putting him in a position where he is eligible to attain his private pilot’s license, but during the hockey season, he hasn’t had the time to fly. Without the proper equipment to effectively run a flight simulator during the season, Donoso has relied entirely upon his offseason experience, prompting him to wait to take his test.

That test features numerous complicated manoeuvres, including takeoffs, landings, and stalling the aircraft, before “bringing it back to life,” Donoso says. He also needs to be able to navigate using nothing but landmarks around him, fly at low speeds to conserve fuel, and a handful of other things. A private pilot’s license is only the start of a career in aviation, however.

As of now, Donoso says he doesn’t have an interest in flying with the air force, saying he prefers the commercial side. Still, he’s not completely sure what he wants to do, whether it be passenger or cargo.

“It’s tough to tell right now,” Donoso said. “In cargo, you fly bigger planes, the 747’s and the 787’s, all of those big planes, whereas if you’re doing regional (airline) flights, then its the 737’s and stuff like that. You also do overnight flights in cargo, so it’s about deciding how you want to balance your life. I’m still figuring that out.”

For as strange as it may seem, flying and goaltending aren’t all that different. Most of the battle is mental, and they borrow skills.

“You always have to be calm and know what’s going on around you,” Donoso said. “You can’t be too tense in the moment. You have to know what you’re doing, and you can’t hesitate with your decision-making. If you panic in the cockpit, nothing is going to go your way, and it’s the same on the ice.”

In time, it’s possible that your flight will be captained by a former 67’s goalie, and if his calmness on the ice is any indication of how he deals with pressure, you can rest assured you’re in good hands.