Capital City Challenge Kicks Off from The Arena at TD Place 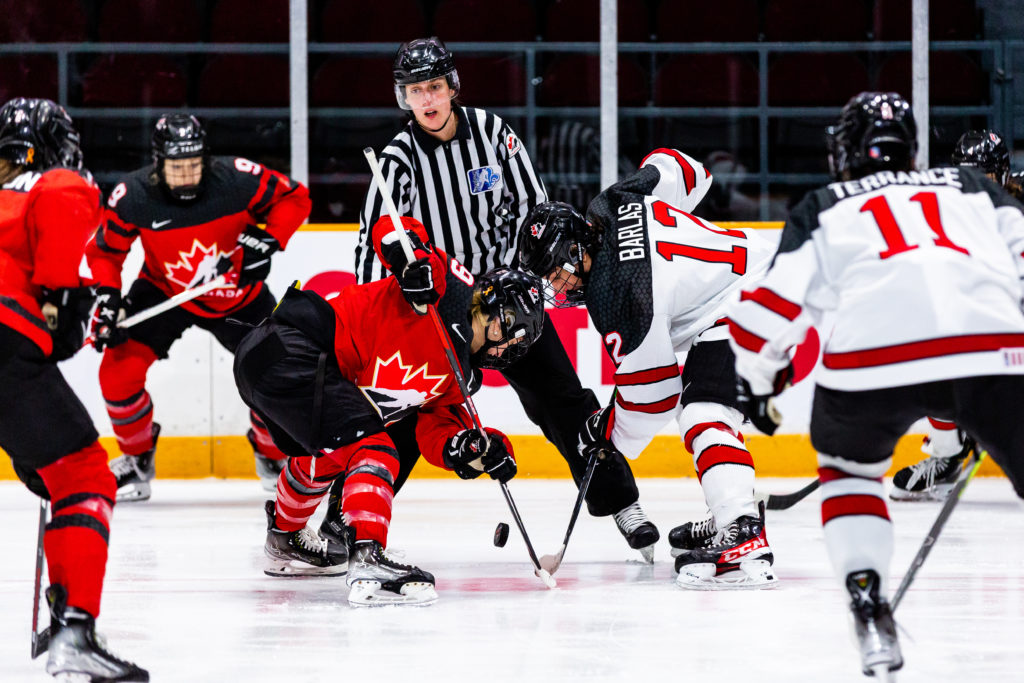 Despite the World U-17 Hockey Challenge being canceled due to the COVID-19 pandemic for the second straight year, hockey fans will still have an opportunity to witness Canada’s brightest young stars, with some added bonuses in a one-time only tournament.

The Capital City Challenge begins today, live from The Arena at TD Place, and will run through Wednesday, December 1. Three teams comprised of the nation’s top young stars will face off against each other, as well as the Canadian National Women’s Team, as they prepare for the 2022 Winter Olympics in Beijing.

Hosting the tournament in their home rink, the Ottawa 67’s will be well-represented, both on and off the ice.

Ottawa’s 2021 first-round draft selection, and local product, Chris Barlas will suit up for Team Canada White. Barlas has appeared in 13 games for the 67’s this season, taking on an increased role of late due to a rash of injuries to the team’s forward core, with head coach Dave Cameron praising the rookie centre’s competitiveness, and physicality.

Another 2021 pick of the Barber Poles, second-rounder Luca Pinelli takes to the ice with Team Canada Red at the tournament. Pinelli has tallied seven points, scoring his first OHL goal on the road against his hometown Hamilton Bulldogs, on November 13. The Stoney Creek, Ontario native is the brother of Kitchener Rangers captain Francesco Pinelli, a second-round selection of the NHL’s Los Angeles Kings this past summer.

The tournament’s full rosters for all four teams can be found here.

Off the ice, 67’s athletic therapist Marie-Pierre Neron is on staff for Team Canada Black. A certified athletic therapist, and sports first responder, Neron joined the Barber Poles to begin the 2021-22 season, after having worked with McGill University athletes throughout the hockey, football, and basketball programs. She was previously the Canadian International Hockey (CIH) Academy’s head athletic therapist.

Sean Young — founder of the Canadian Strength Institute: the 67’s strength and conditioning partner — will also be on board at the tournament, working with all of the tournament’s athletes for the duration of the competition.

The action begins Friday, at 12:00pm EST, with Barlas and Team Canada White facing off with the all-time great Marie-Philip Poulin, and the Canadian National Women’s Team, fresh off of a World Championship victory. Then, at 7:00pm EST, Pinelli and Team Canada Red take on Team Canada Black.

Saturday will be Pinelli’s turn to battle Canada’s world-class women’s team, in a 7:00pm EST matchup that will sure to have the young forward’s home rink on the edge of their seats.

On Sunday, Barlas and Pinelli will get the rare opportunity to play against each other, with Team Canada Red and Team Canada White set for a 2:30pm EST matchup. That night, Team Canada Black will face off against the Women’s National Team, with puckdrop set for 7:00pm EST.

It’s sure to be an exciting five days of hockey at The Arena at TD Place, featuring some of Canada’s brightest stars. Tickets are on sale now, starting as low as $5