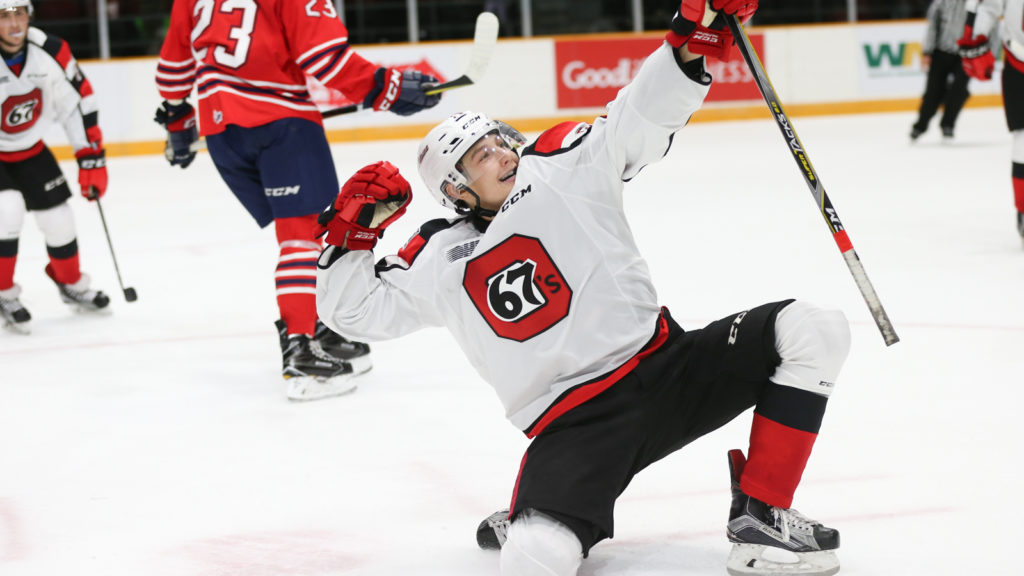 It’s all fun and games in overtime for the Ottawa 67’s.

After a penalty to the Oshawa Generals in the extra period, Kody Clark’s power play tally was the difference to vault the Barber Poles past their divisional rivals 2-1 Friday night.

After a quiet first period where both teams registered a combined eight shots, it was the Generals who got on the board first in the early stages of the second period. Kenny Huether sent a backhand shot toward Ottawa netminder Olivier Lafreniere, and the shot caromed off his back into the open net.

That 1-0 score held until the later stages of the game, when the 67’s dug deep in the third period and resiliently tied up the score on a Sasha Chmlevski goal with just under five minutes to play.

The centreman’s fifth goal of the year was enough to send the game to extra time. The 67’s went into overtime undefeated for the season and came out with their record still in tact.

After Ottawa killed off the tail end of a penalty to start the period, Oshawa’s Domenico Commisso tripped up Mathieu Foget in the middle of the ice to put Ottawa’s power play to work.

On the man advantage, Noel Hoefenmayer found Clark with a pass into the right corner. Clark showed patience with a toe-drag on his forehand before wiring a shot through Kyle Keyser for the game-winner at 4:35.

“It was a really tight game, and I’m really happy with the way we played. Not much happened at first, but when we grind we started to open the play, force the play – offensively nothing happened in the first two periods but that’s okay, our guys stayed with it.”

On Clark… “Did you see his goals on the road trip? Those were huge, goal-scorers goals … he’s at the right place right now. He’s not panicking, he’s confident – but it’s not always going to be like that. I wish he would score every game, but we know that’s not realistic. He has to stick with it and stay patient and confident.”