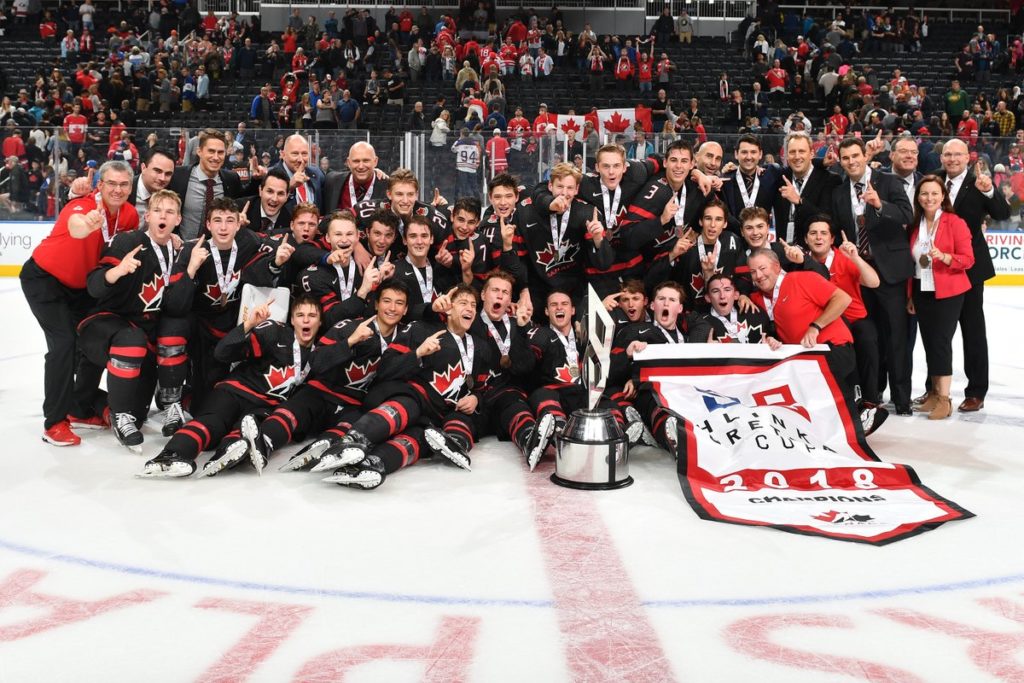 67’s Head Coach Andre Toruigny and forward Graeme Clarke are coming back to the Nation’s Capital as world champions.

The pair represented the Barber Poles at the 2018 Hlinka Gretzky Cup in Edmonton from August 6th-August 11th. Clarke was the 67’s representation on the ice scoring the game winning goal in the first two games and Torigny represented the club off the ice as the team’s Head Coach.

Clarke started the tournament hot scoring the first goal in a 10-0 route of the Swiss. Graeme received a pass off the end boards on the left side of the net and he quickly snapped it home scoring what would eventually be the game winning goal. Later in the game he would add an assist to finish the night with two points.

He followed up his game one performance with a second consecutive game winning goal, this time coming early in the third period against Slovakia. It was another case of knowing where the puck was going and Clarke went to the front of the net just in time to receive a pass right on his stick and he fired it home without hesitation.

Team Canada would go through the round robin undefeated setting up a dramatic semi-final against the United States. Canada trailed 5-4 going into the final minutes and right down to the final seconds when Dylan Cozens of the Lethbridge Hurricanes of the WHL would score the tying goal with less than one second to go. Team Canada would go on to win in overtime punching their ticket to the final.

Following the win, Coach Tourigny pointed out the composure the team showed going late into the game. “They had a lot poise, it was good to see that.”

Saturday night the team took to the ice for one last time in the finals against Sweden. After going down 2-0 early the boys would rally and score six unanswered goals to claim the Hlinka Gretzky Cup on home soil, finishing the tournament undeafeated.

Coach commented on the preparation the team showed going into the game saying “Our guys were so focused today, they were so well prepared, they were real pros in the way they prepared themselves today.

In terms of being down two goals early Tourigny was never worried, “We never felt we were in trouble, we knew what we could do, the guys stuck with it and they showed a lot of character”.

Clarke and Tourigny will be returning to Ottawa with a little bit more hardware than they left with and will be back on the ice with the 67’s at camp at the end of the month.