When it comes to elite hockey players, some weren’t always that “can’t miss, blue chip” prospect.

Sometimes a bit more time, a bit more hard work and people to start paying attention for a young player to really morph into a bonafide, top-flight, NHL draft option.

In the hockey world, these types of players are sometimes referred to as late bloomers, a moniker hung on Jack Quinn at various times this season when he exploded for 52 goals in 62 OHL regular season games in his year of NHL draft eligibility, finding the back of the net 40 more times than he did his rookie campaign in 2018-19.

His sophomore OHL year now behind, things have changed for Quinn.  The Cobden native quickly rose the ranks from a “what round will he go in” to a “where in the first round will he go?”, ultimately landing tenth overall on Bob McKenzie’s famous end-of-year draft rankings.  On top of that, Quinn was ranked seventh-best North American skater by the NHL Central Scouting.

So what changed from one year to the next for the 67’s sharpshooter?

“Just my confidence in my play,” said Quinn in a recent interview with TSN’s Mark Masters. “Being able to handle the puck a little more and being able to make more plays and because of that I had more of an offensive breakout year.”

Quinn led the Barber Poles in shots on goal with a total of 240 over the course of the season, compared to his 92 shots the season prior.  Using one of his strongest weapons that much more made him a menace out on the ice every single shift.  Not only did Quinn gain confidence from the work put on the ice during the offseason, a lot of it was also gained from all the work that was put in off the ice.

“For sure the off-season helped. I had a good summer training with Tony Greco and I worked with (skills coach) Josh Wrobel on my shooting and skills and that helped me a lot. I just got better as the year went on,” Quinn says.

Stats are one thing, and Quinn’s are excellent. But just to the naked eye, watching his progression over the past seasons has been a gift to 67’s fans and fans of the sport in general; from the moment where he was selected in the second round, 39th overall by the 67’s in the 2017 OHL Priority Selection Draft, to today, he has morphed into a fan favourite, a deadly player and a popular teammate.

Quinn’s progress can also be chalked up to the patience the 67’s had with him, electing to have him play a season of CCHL hockey with the Kanata Lasers in 2017-18, a huge part of his development. Quinn had 46 points in 49 games in his rookie CCHL season and was named Rookie of the Year. Now only two years later, Quinn finds himself as a top NHL prospect, making his story of perseverance and hard work an inspiring one for any young hockey player.

“He’s a guy who will always play a lot because he does everything on the ice. He can skate, he can hit, he can get inside, he defends, he plays really well defensively, he can forecheck and backcheck,” said 67’s head coach André Tourigny, in a recent interview with Capital Current’s Mark Bahensky.  “And he’s strong in his battles,” Tourigny said. “He will play with a lot of good players so he will be a really successful guy I think, sky’s the limit.”

“For me he’s a first-line player in the NHL in the future,” added Tourigny.

Where Quinn will go remains unknown until October 6th, but one thing that Ottawa 67’s fans do know is that an NHL team will be walking out with an absolute gem of a player for their future, but for now and next season, the fans will be hoping for plenty of more goals to come inside The Arena at TD Place by Ottawa’s number 22, Cobden native Jack Quinn.

More on the Draft Central! 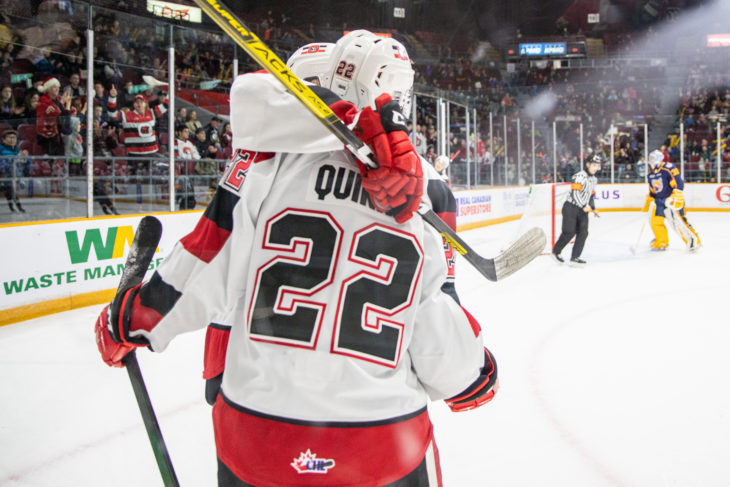