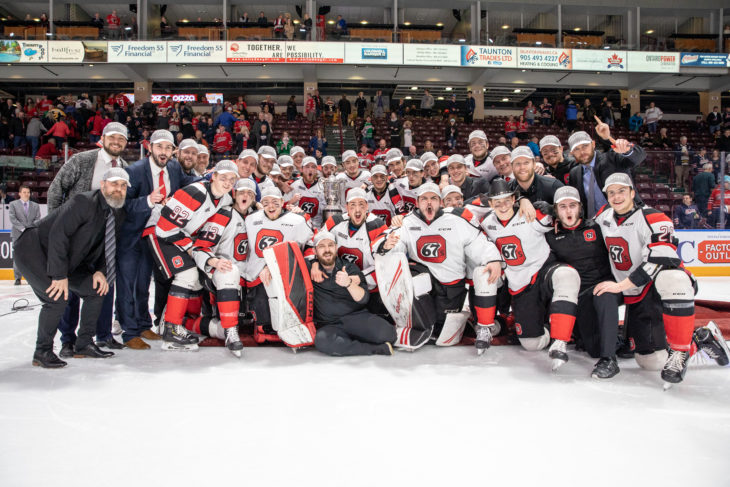 It was a year ago that Pembroke native Tye Felhaber brought out the very late game heroics in Oshawa, during the Eastern Conference Finals of the 2019 OHL Playoffs that sent the Barber Poles to the OHL Finals thanks to two late goals, including the overtime winner.

After sweeping the first two rounds of the playoffs against the Hamilton Bulldogs and the Sudbury Wolves, the 67’s stretched their playoff winning streak to 7 straight games after taking the lead 3-0 in the series following a Game 3 in Oshawa. The Barber Poles headed into Game 4 expecting the biggest challenge yet in that postseason, which is exactly what the Gens gave them in their barn.

It was a very heated game that was went down to the wire, thanks to a great performance from Oshawa goaltender Kyle Keyser, who had 44 shots directed at his net during that game.  Ty Tullio gave the Generals the lead early in the third period, a lead that would last until the very last minute of the hockey game.

The 67’s were pouring it on late in the game, trying to tie it up, before they benefited from a two-man advantage with a minute and twenty seconds left in the hockey game.  Pulling goaltender Mikey DiPietro for an extra attacker, the 67’s players and fans were all standing up, unable to sit down in that final minute, where Tye Felhaber tied the game with a one-time bullet with 34 seconds left on the board, sending the game to overtime.  The 67’s, who were perfect in overtime during the playoffs, only took 20 seconds in the deciding period to score the game winning goal, thanks again to a precise shot from Felhaber.

Two goals scored by Ottawa’s #29 in a matter of 54 seconds made all the 67’s fans in attendance bounce from their seats, whether they were inside Oshawa’s Tribute Communities Centre, at a Lansdowne watch party or simply taking in that game from home, 67’s fans will remember this April 24th, 2019 playoff game for a long time to come.