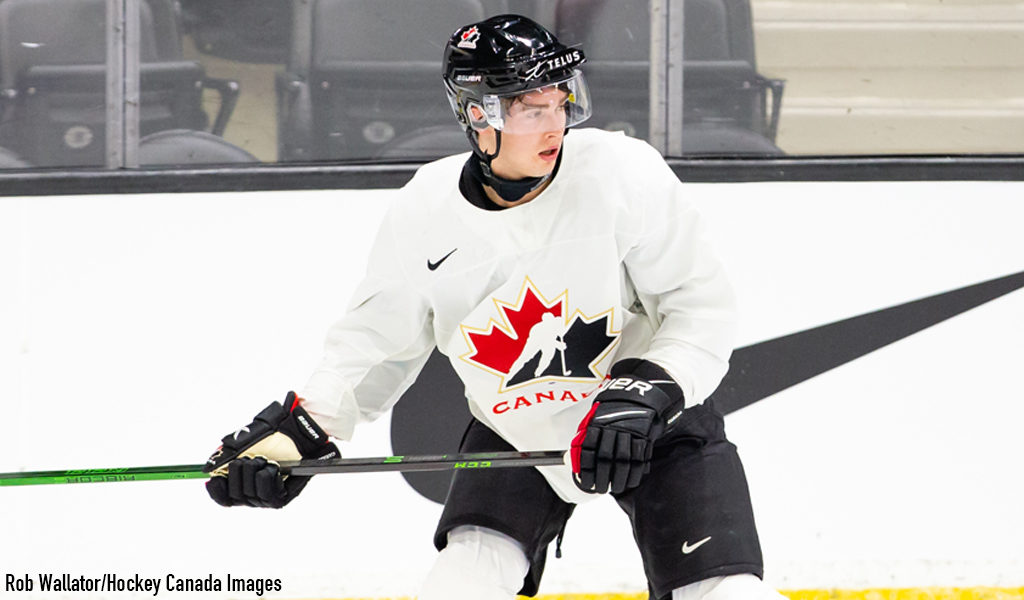 A day after it was announced he’d signed his NHL entry-level contract with the Buffalo Sabres, Jack Quinn hit the ice in Red Deer, Alta. hungry to start the journey toward skating for gold on the international stage. Having a familiar face in Ottawa 67’s head coach Andre Tourigny leading the charge behind the bench is something he’s hoping will help him crack a Team Canada roster for the first time in his career.

On Day 1 of Hockey Canada’s National Junior Team Selection Camp – a camp that will look different from years past with COVID-19 protocols in place – the 67’s forward was put to work with Team Red after what has been an unusually long offseason.

“The workout I did today was probably the most intense skate I’ve done in awhile because summer skill skates aren’t the same, especially with the ten person max rules in Ottawa,” said the Sabres prospect during Team Red’s media availability following the camp’s first day. “But fitness wise, I’m ready and it was a good skate today to get my legs back under me.”

Having played under the guidance of Tourigny for the past two seasons in Ottawa, Quinn says he hopes that level of familiarity will ultimately work in his favour while acknowledging the work he knows he has to put in to earn his spot.

“Obviously it’s an advantage for me,” he said of his familiarity with Tourigny. “I know what he expects in practice, what he expects in games, all the little habits, the details he teaches and the systems as well. So I think I know things but at the same time I still have to show up and execute them. Since I’ve been with him that long he expects a lot out of me.”

The Cobden, Ont. native scored a remarkable 52 goals and 89 points as an OHL sophomore last season on the League’s first place 67’s. He credited his shooting coach with helping him tweak his offensive flare but also spoke to how Tourigny has helped him develop into one of the League’s top scorers, a feat that ultimately landed him his shot as a World Juniors hopeful.

“Andre helped me a lot in Ottawa, he challenged me to get inside in the middle of the ice and score goals from in there and around the net.  I think that kind of mindset changed my game a lot and gave me a lot more opportunities,” said the first round 2020 NHL Draft pick.

When asked about what he’s hoping to see from Quinn over the next few weeks, Tourigny said he was “hoping to see what he sees every day with the 67’s.”

“I hope to see a super hard working guy, a guy with a lot of hockey sense, a guy who competes and gets inside of the ice and is really good defensively,” he said. “Jack’s a hell of a player, I know him really well, I know what he can do.”

Though he saw a noticable nervous Quinn on the ice, he spoke highly of his emotion.

“I could feel the nerves for him today, he was nervous his first day with team Canada. I could feel his emotion but he will settle down and he will get more comfy day in and day out. He’s a super smart kid so I’m not worried,” Tourigny continued. “You could see it was putting a lot of pressure on him so I told him to relax and be himself. It doesn’t have to be that stressful, but at the same time, I like to see that. That means he cares, he really wants to perform.”

“Watching Andre last year and Balher as well, we were all cheering for them all tournament and we were extremely happy for them to win gold and it’d be awesome if I could make the team this year and try to do the same.”

Another advantage? Hockey Canada’s longer-than-usual camp, running from Nov. 16 up to Dec. 13 ahead of Canada’s first tournament action on Dec. 26.

“I think it’s better for everyone that the camp is longer instead of shorter because of the weird offseason,” he continued. “It gives everyone a chance to get their legs under them and show their game over a course of time.”

And for a newcomer like Quinn, who fortunately has another familiar body present in teammate Graeme Clarke, more time spent at camp means the opportunity to get closer with this group of guys he’s hoping to call teammates in a month’s time.

“A lot of us don’t know each other, this is my first Hockey Canada event. This long, with all the guys, is awesome to get to know them and get to know the systems we’re paying and gel as a team. So I think it’s a big advantage.”