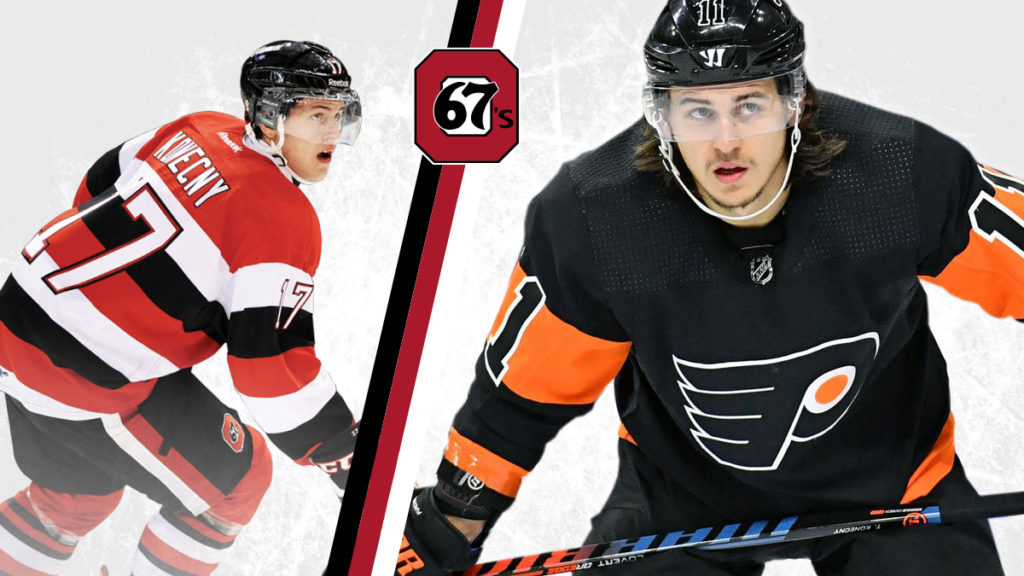 Following the play-in round of the NHL Playoffs, teams are now preparing to get the real thing underway, as the Stanley Cup Playoffs will begin on Tuesday afternoon, as there are four games on the NHL’s program for the day, from 3:00 PM ET up until a 10:30 PM late start. For the next week and a half or so, hockey fans will have their eyes glued to their television screen for hours and hours as there will be no shortage of Stanley Cup Playoff action during the first round. Ottawa 67’s fans will be keeping a close eye on four ex-players who have moved on to the first round of the players. Players who all rose crowds to their feet inside The Arena at TD Place, such as Sean Monahan, Petr Mrazek, Tyler Toffoli and Travis Konecny, will all be supported by Barber Poles fans in the nation’s capital.

Here is a quick roundup of performances from these players during the play-in round and a short preview of their first round best-of-7 matchup:

In what was a four-game series win by the Calgary Flames over a strong Winnipeg Jets’ side, Monahan was one of his team’s best players throughout the series, collecting two goals and four assists for six points, including a three point night in game three as well as a goal and an assist in the decisive game four. Playing on a line with Johnny Gaudreau and Elias Lindholm, Monahan and his linemates will look to drive Calgary’s offense against a very good Dallas Stars side, in what should be a long, hard fought series.

The Carolina Hurricanes wasted no time moving on to the first round of the playoffs, as they defeated the New York Rangers with a three-game sweep in the play-in round with wins by a score of 3-2, 4-1 and 4-1, respectively. A huge part of that was goaltender Petr Mrazek, who shone in games one and two. Mrazek shut the door in game one by saving 24 of the 26 shots directed at him, followed by a 23 save performance in his team’s game two win. Mrazek would be rested during game three, in which backup James Reimer also looked good and was able to clinch the series in three games. It is no small challenge awaiting the Hurricanes, however, in the first round of the playoffs, as they’ll be facing the President’s Trophy winners and last year’s finalists, the Boston Bruins. Although Boston did not play their best hockey in the play-in round robin, the experience and talent on their roster is undeniable, making it a very explosive series between a young, dynamic up and coming team, against a grizzled, experienced team that’s been there before.

The Flyers went undefeated in the play-in round robin, winning all three of their games, allowing them to clinch the number one seed in the Eastern Conference. Playing on a line with another high-energy forward and OHL alumni Scott Laughton and two-way centreman Kevin Hayes, Konecny played his usual game that 67’s fans were used to seeing him play, which is a display of his high-end skill and his limitless will to win. TK managed to collect two assists in the three round-robin games that the Flyers played, but his contribution to his team game in and game out is unquestionable. In one of the more intriguing series, the number one seed Flyers will take on the Montreal Canadiens, who defeated the Pittsburgh Penguins in four games during the play-in round, which was most likely the biggest upset of the opening round. With Carey Price in goal, the Canadiens are not to be taken lightly, but the Flyers are coming in heavy favourites.

Toffoli played 15:22 in the opening game of the Canucks’ best-of-three series against the Minnesota Wild, but did not see any more action after that due to a lower body injury. It still remains to be seen if he will be able to return in his team’s matchup against the defending Stanley Cup Champions, the St. Louis Blues. His veteran experience of winning a Stanley Cup with the LA Kings a few years back would definitely be more than welcomed to a young roster like the Canucks’, as they have a big challenge ahead of themselves in the Blues.