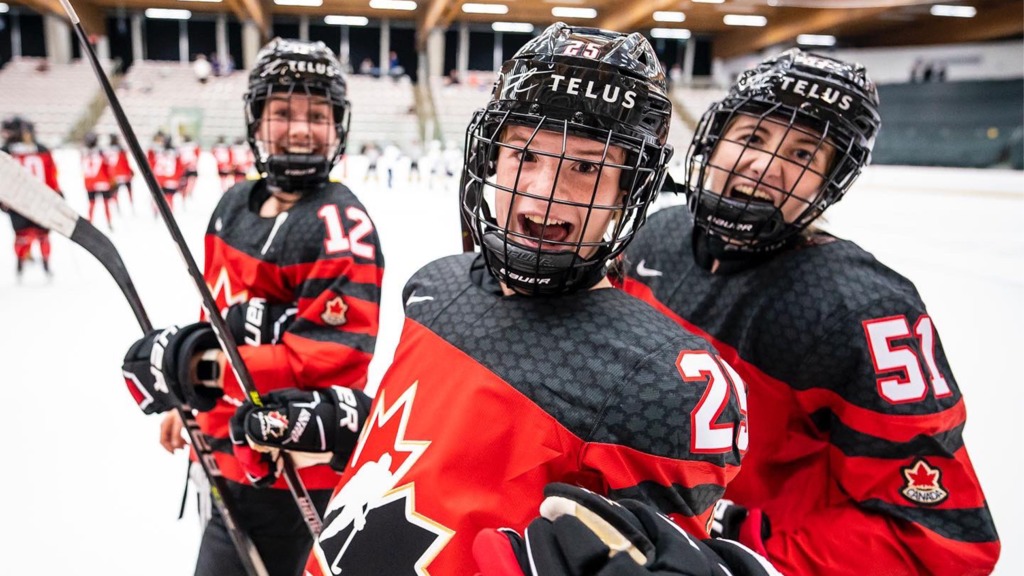 The Ontario Hockey League wasn’t ready for the kind of game Brady Stonehouse brought to the table with the Ottawa 67’s, and he has quickly become a fan favourite, but what if you found out there was a second Stonehouse, or even a third?

The three Stonehouse children, Brady, Abby, and Brett, all have a separation of about 18 months between their birthdays, but they all share one thing: a love for hockey. It’s a passion they also share with their father, Jeff, who played four years at Harvard University in the NCAA, before settling down and starting a family with his wife, Lisa.

Of the Stonehouse children, Abby is next to turn some heads. Currently playing Under-22 at the age of just 17, Abby credits her ultra-competitive household for her style of play. She says that she regularly went toe-to-toe with older brother Brady, and he didn’t let up, forcing her to model her game to meet her brother’s nastiness.

“It was always a battle whether it was shooting pucks, playing mini sticks, or playing road hockey. Growing up against that made me tough,” Abby said. “Being able to play like him is cool, he’s taught me a lot.”

While the three siblings do have an appreciation for one another’s accomplishments, they all have an intrinsic drive and desire to constantly one-up each other. Jeff says that his kids all root for one another to be better, and push to new levels, but they all want to be the best.

With a big, hockey-playing, family, Jeff and Lisa often found themselves outmanned, searching for alternatives to get everyone to the various places they needed to be.

“We were going in different directions a lot of the time as a family,” Jeff said. “I would be with one of them, and Lisa would be with another, and one of them would have to go with a grandparent or a teammate.”

During the summer, Abby was invited to Hockey Canada’s Under-18 Summer Showcase. The group of invitees was split into two Canadian teams, with Abby on Team Red, and scoring a goal, in three games played.

The good news continued to come for Abby, as she was named to the U18 Summer Series roster, and played three games against the United States in August. Jeff and Lisa, unfortunately, weren’t able attend selection camp, but when Abby found out she had made the team, the first thing she did was call them.

“We were proud,” Jeff said, struggling to find the right words. “We were happy for her, and just so proud of her.”

The moment was certainly big for her parents, but for Abby herself, it was almost surreal.

“That was a dream come true, I have always wanted to do that,” Abby said. “It was a lot of fun to wear the Maple Leaf against the Americans.”

This time, her parents were in attendance for the games in Calgary. Heading into the third game of the Summer Series, Abby had yet to register a point, but that would change in the second period, when she scored unassisted. It’s a moment that won’t soon be forgotten in the Stonehouse household.

“Knowing the work that she has put in, and the commitment as a family [makes Lisa and I proud],” Jeff said. “To see her have that moment was awesome. It was a really proud moment, I can’t really put it into words.”

Even though she had previously scored a goal for Canada, this one carried added importance.

“Having my parents there was special,” Abby said. “I got to keep the puck, and I keep it in my room. I’ll have that forever.”

Coming off of the high of representing her country, things didn’t settle down for Abby when she got back to the London Devilettes. She already had her attention turned to the next important decision in her life: where she wanted to go to college.

She had it narrowed down to just two schools, one of them being Penn State, and the other being Boston University. Both Jeff and Lisa wanted to let their daughter make the choice she thought was best, something Abby is incredibly thankful for.

In late October, Abby made it official. She was going to Penn State.

The education portion of the commitment means a great deal to Abby and her parents, of course. During her high school career, Abby has earned academic honours in both Grade 9 and 10, and Jeff says that he’s at ease, no longer needing to worry about where Abby will get her higher education.

It also serves as a relief for Abby, of course, who says she can now narrow her focus to just her school work and hockey.

Abby’s college commitment was a cause for celebration for the whole Stonehouse family, including Brady, who was in the midst of helping the 67’s to their incredible start to the season.

“I was happy for her,” Brady said. “It’s another step in her journey. She’s a good hockey player, and she has earned it.”

One thing that has always been important for Brady is leadership, whether it be with his own teams, or with his siblings while he was at home. He wants to set an example, and says that either Abby or Brett can come to him with anything they need, no questions asked.

That open-door policy is something Abby is happy to have, and she plans to take full advantage of her brother when it comes to developing skills she wants to add to her toolbox.

“I think I need a quicker release,” Abby said. “That’s something Brady is really good at, so getting him to help me will be really good.”

One of Abby’s biggest goals this season is to be named to Team Canada for the Women’s U18 World Championship in Sweden this winter, but they don’t stop there. Her goals and aspirations are long-term and ambitious, but she’s willing to put the work in to help make them a reality.

“I want to play in the Olympics, that’s my ultimate goal,” Abby said.

Whether that dream comes true or not, the sense of pride Jeff has for his children and his family, will never change.

“I just feel really proud,” Jeff said. “I feel proud of the three kids, proud of my wife, and proud of the family that we have raised.”