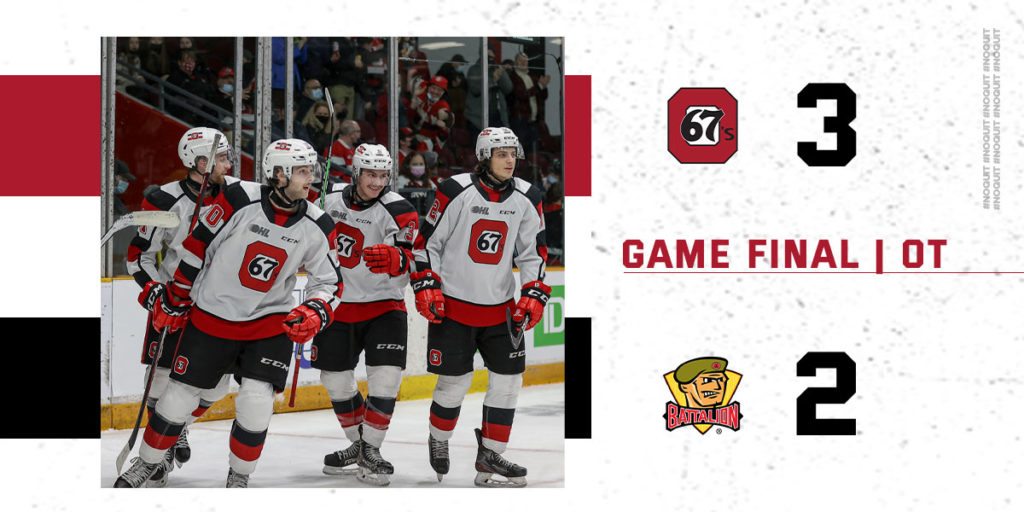 In yet another gutsy effort in the absence of seven regular players, the Ottawa 67’s ended a four-game losing streak, Saturday, with a hard-fought 3-2 overtime win against the top-ranked North Bay Battalion.

Brady Stonehouse opened the scoring in the first, and following a pair of Battalion markers, Cam Tolnai tied it late, setting the stage for Vsevolod Gaidamak’s second overtime winner of the season. Will Cranley was superb in goal, turning aside 20 of 22 North Bay shots.

After weathering an early storm, the 67’s settled in with an extended period of play in the Battalion zone. Finally, a great play by Alec Belanger from below the goal line got the puck to the net, and Stonehouse crashed the crease, knocking home the rebound for a 1-0 Ottawa lead.

The Barber Poles controlled the flow of play for the remainder of the frame, but it would be the Battalion who struck next, as a Ty Nelson point shot tied the game with just over 22 seconds to play in the first period. Ottawa headed to the second in a 1-1 tie, while outshooting North Bay 9-5.

Despite being given a five-minute powerplay in the second, the 67’s weren’t able to convert on some quality chances, with Battalion goaltender Joe Vrbetic making a series of huge stops. His play in the crease allowed North Bay to take a 2-1 lead with 2:51 to go in the period, when Kyle Jackson found the back of the net.

Ottawa poured it on in the third, outshooting North Bay 13-8, and were finally rewarded 11 minutes in. Teddy Sawyer started an odd-man rush, and Cooper Foster made a great feed to Tolnai, who went top shelf to tie the game, and send the 2,840 Barber Poles fans in attendance to their feet. Foster was awarded his first career OHL point on the play, and Tolnai’s seventh of the season made it a 2-2 game.

Both teams traded chances late in the third, but the overtime frame was all 67’s, not even allowing the Battalion to register a shot. 2:11 in, Sawyer fired a rocket off of the glass behind the North Bay goal, and the puck bounced right to Gaidamak, who made no mistake on the open net, giving the 67’s a well-deserved 3-2 win over the top team in the Eastern Conference.

Up Next: The 67’s are on the road again, tomorrow, taking on the Peterborough Petes at 2:05pm EST. 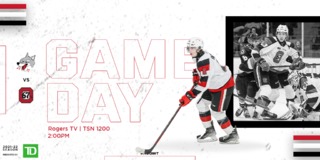